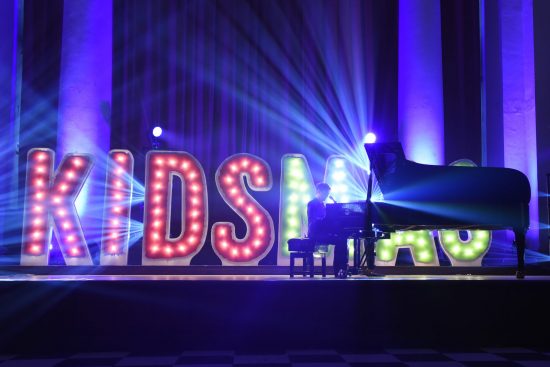 The Barnardo’s Kidsmas Live Concert, supported by Vodafone on #GivingTuesday 2020, has raised much needed funds to support vulnerable children and young people across the UK. Hosted by Barnardo’s President Natasha Kaplinsky, the event included special performances from singer-songwriter Jamie Cullum and poet Hussain Manawer and a message of support from charity ambassador Fay Ripley. People across the UK tuned into the hour-long show which is now available to view here.  There’s also still time to donate at www.kidsmaslive2020.com.

Jamie Cullum took to the stage to perform his latest track ‘How Do You Fly’ from his new album ‘The Pianoman At Christmas’. Poet Hussain Manawer penned and performed ‘Christmas Tree’ – an exclusive new poem reflecting the challenges of 2020 while offering hope and inspiration to young people across the UK at what can be a difficult time of the year. There were also performances from the St Margaret’s School Choir from Aberdeen, the Brent Music Service Choir from London and the Merthyr Barnardo’s Young Carers’ Choir from Merthyr Tydfil.

Vodafone UK provided the connectivity for the event and launched a Christmas-special Great British Tech Appeal in support of Barnardo’s, calling on the UK public and businesses to donate unwanted smartphones and tablets over the festive period and beyond. Vodafone will cover postage and repackaging, add six months free unlimited data connectivity and – via Barnardo’s – redistribute the devices to disadvantaged children and families. This follows a successful summer appeal that helped almost 2,500 people across the UK.

To donate to the appeal, please visit www.vodafone.co.uk/techappeal.

Jamie Cullum said: “I am grateful to have been able to spread some festive joy at this year’s Kidsmas Live event. The concert has helped raise vital funds for Barnardo’s – in what has been a tough year for the charity. Please keep giving anything that you can either by donating to Barnardo’s or sending unwanted devices to Vodafone. It really does make a difference.”

Hussain Manawer said: “It was fantastic to see how many people across the UK watched Kidsmas Live – and I am really pleased to have been a part of the night. I hope you enjoyed the festivities and I encourage you to think about all those who may not be as fortunate – and help by donating if you can.”

Barnardo’s Chief Executive, Javed Khan, said:  “I’m hugely grateful to everyone who tuned in and supported this year’s Kidsmas Live, hosted by our fantastic President Natasha Kaplinsky. This has been an extremely challenging year for everyone, and especially for the vulnerable children and young people Barnardo’s supports. On behalf of them, I’d like to thank our talented performers Jamie Cullum and Hussain Manawer, our ambassador Fay Ripley, the children’s choirs, and our partner Vodafone for making this possible. With their help, and yours, we have raised vital funds to keep supporting vulnerable children through the COVID-19 crisis and for as long as they need us.”

Helen Lamprell, General Counsel and External Affairs Director, Vodafone UK, said: “It has been a pleasure to work with Barnardo’s and support Kidsmas Live and we hope families across the nation enjoyed the performances as much as we did. What a great start to the festive season!  If you do have unwanted smartphones or tablets at home, please consider donating them to The Great British Tech Appeal – with your help, we can connect more people.”

The Barnardo’s Kidsmas Live Prize Draw (with prizes including a Bean to Cup Coffee Machine, a Champagne Afternoon Tea at The Dorchester Hotel, and two tickets to an Olly Murs concert plus a ‘meet and greet’ with the star) is open for entries until Sunday 6 December. To enter, visit www.kidsmaslive2020.com.

Barnardo’s is Vodafone’s charity partner for its Christmas campaign which includes ‘Light Up’ – a reimagined 5G light display that enables children to see their Christmas card designs up in lights and that also makes bespoke e-cards for friends and family. Launching in December, for each card submitted, Vodafone will donate £1 to Barnardo’s which will be match funded by Vodafone UK Foundation[1].

Last year around 300,000 children, young people, parents and carers were supported by Barnardo’s through more than 1,000 services across the UK, such as young carers, care leavers, foster carers and adoptive parents, training and skills or parenting classes. We work to change the lives of vulnerable children in the UK and every year we help thousands of families to build a better future. But we cannot do it without you. Visit www.barnardos.org.uk to find out how you can get involved. Registered charity No. 216250 and SC037605. Follow Barnardo’s media team on Twitter @BarnardosNews