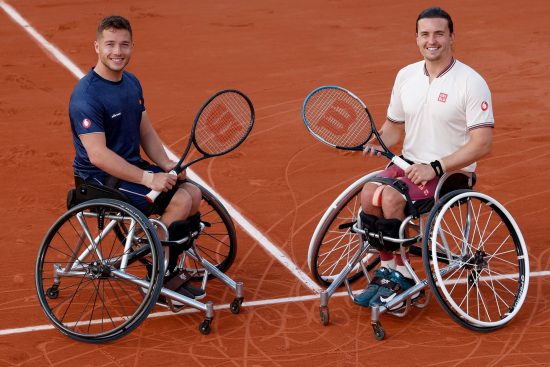 Vodafone has announced new partnerships with British stars Jack Draper, Alfie Hewett and Gordon Reid as its new tennis ambassadors. Alfie, Gordon and Jack will work with Vodafone to inspire the next generation of players and help grow grassroots tennis in the UK.

Alfie and Gordon are two of Britain’s greatest ever tennis players, with 39 Grand Slams between them alongside multiple Paralympic silver and bronze medals, as well as a Paralympic gold for Gordon. Jack Draper is one of the fastest rising stars in men’s tennis, with Vodafone fully supporting his push to break the top 100 following an incredible start to 2022 – the first major brand to do so.

Vodafone will work closely with Alfie and Gordon to identify how tennis can be made more accessible to players of mixed ability across the UK and tackle common barriers within the sport. All three players will also be working with Vodafone as part of its broader commitment to support all levels of British tennis and to encourage people of all ages, backgrounds and abilities to pick up a racket.

This will include the relaunched and expanded individual mass participation competition Play Your Way to Wimbledon, powered by Vodafone, which next year will include disability categories for the first time. Formerly known as the Road to Wimbledon, Play Your Way to Wimbledon is delivered in partnership by the LTA, The All England Lawn Tennis & Croquet Club and Vodafone, with over 15,000 playing opportunities this year across the regional qualifiers and national finals, which will take place on Wimbledon’s Aorangi Courts.

Emma will support the brand’s commitment to help grow grassroots tennis in the UK, using Vodafone connectivity to expand access to the sport for people of all ages, backgrounds and abilities.
Find out more

Alfie Hewett said: “I’m thrilled to be working with Vodafone to help shine a light on disability tennis in the UK, and inspire more people to get involved in sport, whatever their ability. Adding wheelchair tennis to Vodafone’s new Play Your Way to Wimbledon partnership with LTA and Wimbledon is a great first step, and I’m excited to help deliver meaningful change in the years to come.”

Gordon Reid said: “Vodafone stepping up to support wheelchair tennis is amazing to see, and I’m looking forward to supporting the new Play Your Way to Wimbledon competition. I’m passionate about growing the sport and encouraging greater level of participation, and it’s great to be working with a brand that shares the same goals.”

Jack Draper said: “I’m excited to be working with Vodafone to help inspire more kids to pick up a racket and get involved in the sport. Winning Road to Wimbledon as a junior was an amazing moment for me, so I know the impact supporting grassroots tennis can have, and I’m looking forward to being able to provide the same opportunities for the next generation.”

To mark World Autism Day on Saturday 2 April, we caught up with Dominic Iannotti, ranked best in the world for Learning Disability (LD) tennis. (Video courtesy of Kieran Brand).
Find out more

Max Taylor, Vodafone Consumer Director, said: “Vodafone is proud to announce Alfie, Gordon and Jack as its new tennis ambassadors. Together with our ambassadors and partners, we can deliver a more inclusive Play Your Way to Wimbledon and make it possible for everyone at every level to enjoy the game.”

The announcement follows Vodafone’s recent multi-year deal with The Championships, Wimbledon and The All England Lawn Tennis & Croquet Club as Official Connectivity Partner, as well as new partnerships with Emma Raducanu, Laura Robson and Tim Henman.

Working alongside Wimbledon and a suite of ambassadors, Vodafone will use its world-leading connectivity, superfast 5G network and cutting-edge AR, VR and haptic technology to help bring the sport to more people and enhance the viewing and playing experience.

About Play Your Way to Wimbledon, powered by Vodafone

Formerly known as the Road to Wimbledon, the event was championed by the late Paul Hutchins MBE, former British Davis Cup Captain. It was first held in the UK in 2002, with the addition of qualifying tournaments in several Asian nations introduced between 2014 and 2019. Having paused the event due to the pandemic and given the introduction of a 14&Under event to the Junior Championships to be hosted during the second week of The Championships from 2022, the All England Club and the LTA took the opportunity to reimagine the mass participation competition with a sole focus on UK participants.

Entries for Play Your Way to Wimbledon, powered by Vodafone, opened on 1 March 2022, with thousands of players from clubs, parks and schools in the UK taking part in the 14&U girls’ and boys’ singles and 18&U girls’ and boys’ doubles.

Winners will progress to county and regional finals held in June and July where they can secure their place at the national finals, to be held at the Wimbledon Aorangi courts from 7-13 August 2022.