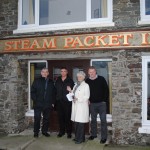 Situated on the beautiful Wigtownshire coastline, the Isle of Whithorn and Whithorn have until now suffered from unreliable mobile coverage and slow network speeds across all mobile networks.  The ROSS programme uses Vodafone’s innovative Sure Signal technology to bring high quality 3G voice services and much needed access to the internet via mobile devices to communities in some of the UK’s most beautiful and remote areas.  About the size of a cereal box, the Open Sure Signal units connect to existing broadband lines to create 3G coverage, and are installed high up on chimney breasts or the eaves of buildings.

The ROSS programme is a national initiative by Vodafone UK to provide reliable mobile access to up to 100 rural communities in mobile not-spot locations. Launched in July 2014, with support from local MPs, councils and rural action groups, the programme received an overwhelming response, with applications from communities across the country from the Shetland Islands to Cornwall to the mountains of Snowdonia.

Jorge Fernandes, Vodafone UK Chief Technology Officer, said: “I am pleased that the Isle of Whithorn and Whithorn have joined our Rural Open Sure Signal programme. Mobile connectivity is an essential service for communities and businesses to thrive in today’s digital world and support local economies. As part of the Rural Open Sure Signal programme, we are committed to investing in our network to provide access even in remote locations where it is otherwise almost impossible to reach. The amount of data passing through the units already shows the significant benefit the technology is making to members of these communities. I am really excited to see the transformation for the Isle of Whithorn and Whithorn, and the other communities which have been successful for this pioneering programme.”

Richard Arkless, MP for Dumfries and Galloway said: “I am delighted that the Isle of Whithorn and Whithorn will now be receiving reliable 3G. I am excited about what can be achieved in these communities now that they have this connection. Enormous credit must go to the local community for being proactive enough to persuade Vodafone to come to the Machers and provide this upgrade. I am grateful to Vodafone for providing this initiative but disappointed there are not more! I will continue to work on persuading them to roll out these initiatives across other rural areas in Dumfries & Galloway that have so much to give but simply can’t get connected.”

Sue Reedman, Village Champion for Isle of Whithorn commented: “When I was The Secretary of Isle of Whithorn First Response we used Vodafone pagers for our responders, they were not very efficient as we had no mobile phone signals in the village. The Responders were always worried that they would miss a call. That was a few years ago, and since then I have been working to try and get a mobile phone signal in the village. Vodafone informed me of the #ROSS100 programme and we were successful as fibre had just been put in the village. We now have three masts, which have been erected on premises with kind permission of the owners. A lot of support has been given by our local Community Council and Alistair Geddes. I am grateful to Vodafone for ensuring that we now have a mobile phone signal in the Isle. Welcome to the 21st Century.”

As well as using Rural Open Sure Signal to plug rural “not-spots”, Vodafone is spending around £2 billion on its network and services across the country over 2014 and 2015.  This includes the provision of HD (High Definition) Voice technology on its 3G network and the extension of its 4G coverage to 697 cities and towns and thousands of smaller communities across the UK.