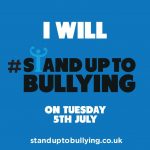 In partnership with Vodafone UK and funded by the Vodafone Foundation, the Diana Award are launching the first ever national Stand Up To Bullying day.

In partnership with Vodafone UK and funded by the Vodafone Foundation, the Diana Award are launching the first ever national Stand Up To Bullying day. On 5 July 2016, I, along with many others will #StandUpToBullying, helping people take a stand against bullying in the home, workplace, school and in all parts of society.

There’s nothing worse than a hidden problem. So no matter what issue we’re talking about – cyberbullying, real life bullying, or something different entirely – anything that gives people the opportunity to have a conversation about what’s happening, and to have it in a positive way, can only be a good thing. That’s the way that you confront and deal with things.

A new YouGov survey commissioned as part of this campaign, has highlighted the huge scale of the problem – nearly a third of young people reported being bullied in schools across England, 29% of people report having been bullied at work and through our own research we found that 68% of the young people polled knew someone who had been cyber bullied.

You can check out the video I made for #StandUpToBullying here

At 10am on 5 July we’re looking to encourage as many people around the UK as possible to stand up for one minute and post an image or video of themselves taking a stand, or raising a hand, as a sign of unity against bullying – we really want to get people thinking about the issue.

Groups like the Diana Award, who have spearheaded the project, have the ability to get lots of people involved in things like this and really give it their positive support, which is a powerful start. But how do you turn that talking point into something that will really get the message across?

The real success when it comes to tackling bullying comes from a combination of things. On one hand you need to show that the people around your kids – their family and friends – really care about the issue, but then it’s also about involving people who kids really regard as role models.

Allowing children to have the conversation, making it clear that bullying in any form isn’t acceptable, and then adding the halo effect of the Diana Award bringing in kids’ heroes – like prominent YouTubers and music groups – gives it that extra push.

We all need to make sure young people know that it isn’t acceptable to bully other children and in make sure that there’s a support mechanism out there with other people who agree that bullying isn’t on.

But the most important thing of all is to make sure the debate isn’t one-sided. Most children are more digitally savvy than their parents. One of my daughters is completely technologically enabled, for instance, and is constantly teaching me how to do things that aren’t actually that tough once you know how. That’s inevitable because kids grow up with tech, and it’s why it’s so important to build a peer-to-peer message alongside everything else – if you’re just making an anti-bullying campaign just about the parents and the teachers, it’ll fail.

The key thing to remember with all of this? As a parent you’re incredibly protective when it comes to anything that might open your child up to risk, but you’ve got to learn that you can’t always be there; they will always standing on the boundary of a new risk. It’s about how we deal with these things, rather than just saying ‘no’.

Take cyberbullying, for example – technology is a great enabler, so we don’t want to be negative about it and make children fearful. But at the same time we do also need to give young people the sense that there are bullies and risks online, just as there are in the real world, and teach them how to deal with those risks in a positive way.

Human behaviour can be bad in the playground or workplace or bad online, but the difference is that in the playground the teacher is more likely to stop what’s happening, at work, colleagues may step in. On phones you’re more likely to miss it. #StandUpToBullying Day on 5 July is all about giving people the tools and awareness, to push back against that bad behaviour, whether it’s online, at school, or anywhere else.

At Vodafone UK and the Vodafone Foundation we’re proud to be a part of that, because we always want to be able to help wherever we can. It’s not just about corporate responsibility; it’s also that, as human beings, if you see a problem you can help with, you should. It’s a simple human reaction, and if we all apply that rule then I’m sure the world will be a nicer place.

As for me? I’m going to be with my children today on #StandUpToBullying Day. I’ll be talking to them about all of these topics with the help of our school campaign packs – which include discussion points for children around bullying – as well as wearing the #StandUpToBullying badge to show my support.

Helen Lamprell is Vodafone UK’s Corporate & External Affairs Director and a member of the board for the Vodafone Foundation.

To find out more about #StandUpToBullying and what Vodafone UK is doing to support, visit www.standuptobullying.co.uk