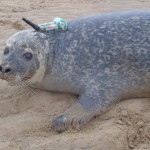 First marine mammals to be connected to the Internet of Things.

Vodafone, which has been connecting people for more than 30 years, will from next month use its technology to help connect seals to the ‘Internet of Things’ – the first time this has been done anywhere in the world.

Under a three-year, major Government-backed initiative, the Sea Mammal Research Unit (SMRU) at the University of St Andrews will begin a study into the sharp decline in Harbour seal populations off Orkney, Scotland.

Marine scientists at SMRU will attach their next generation of marine telemetry tags harmlessly to the fur at the back of the heads of a number of seals. The marine tags are small and lightweight, and simply drop off when the seal moults.

The marine tags, which work much in the same way as smartphones, will use Vodafone’s latest machine-to-machine (M2M) technology to send vital information from the seal when it surfaces or beaches directly back to SMRU for analysis. M2M technology is now a standard feature in new cars, heart monitors and smart meters, but never before has it been used to help monitor the well-being of marine mammals.

Vodafone’s M2M dedicated network significantly improves data gathering on a seals’ location, dive behaviour and its oceanic environment since it works across multiple mobile technologies. Among other benefits, it allows marine scientists to control directly the active state of every SIM card in each marine tag from a single PC.

The study by SMRU is being carried out at the request of the Scottish Government and Scottish Natural Heritage which have great concerns for the future survival of Harbour seals in areas of Scotland. Harbour seals – one of two seal species in the UK – have declined in numbers by up to 90% in some areas in and around the North and East coast of Scotland, including Orkney, since 2000.

The data collected and analysed by SMRU is vital in being able to provide advice to Scottish Ministers across a range of key marine policy areas. These include the impact of marine renewables such as offshore wind and wave turbines, unexplained seal deaths and interactions with salmon fisheries.

Professor John Baxter, Principal Adviser, Marine, Scottish Natural Heritage said: “This exciting, collaborative study is vital to help us to better understand the drivers of population change in Scottish harbour seals, and to evaluate the potential conservation and management options open to us.”

SMRU’s Deputy Director Dr Bernie McConnell said: “Over the last 15 years, many of the harbour seal populations in the Northern Isles and on the north and east coasts of Scotland have been declining.  Marine data collected during this project on Orkney will help to assess the causes, management and mitigation options in relation to the harbour seals decline and to prioritise future research directions.”

Vodafone UK’s Corporate and External Affairs Director Helen Lamprell added: “The first mobile call was made on our network more than thirty years ago. We will now be the first company to help transmit valuable information from seals.

“This project is proof that collaborations between government, science and the private sector can work to improve better informed policy decisions on the environment. We are delighted to be able to provide Bernie and his team with access to our technology and consultancy.”

The Sea Mammal Research Unit is based at the Gatty Marine Laboratory at the University of St Andrews and is funded by NERC (the Natural Environment Research Council).

SMRU developed the world’s first data capture and relay tags in 1982 and has progressively improved their design and functionality for its own use in the UK and by similar research establishments elsewhere in Europe, North America and Asia Pacific.  A marine smart tag, connected to Vodafone’s global M2M platform and third-party satellite services, is lightweight, no larger than a mobile phone and can withstand depths of up to 200 metres.

The acknowledged international expertise of Marine Science at St Andrews has led the University to commence a fundraising appeal for a new flagship building, seeking a £9.6m investment to provide a new aquarium and research facility in the East Sands at St Andrews.