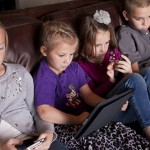 With almost eight in ten households now having fixed broadband access and 66% of homes also having access to the internet via smart phones (Ofcom, 2015), the internet enables both parents and kids alike to complete homework, household chores and enjoy entertainment on demand. However, new research from Vodafone UK has revealed that parents are losing their grip over children’s consumption with 48 per cent now turning a blind eye to their kids’ constant connectivity due to it being so hard to control without causing friction.

With almost eight in ten households now having fixed broadband access and 66% of homes also having access to the internet via smart phones (Ofcom, 2015), the internet  enables both parents and kids alike to complete homework, household chores and enjoy entertainment on demand. However, new research from Vodafone UK has revealed that parents are losing their grip over children’s consumption with 48 per cent now turning a blind eye to their kids’ constant connectivity due to it being so hard to control without causing friction.

New statistics released today by Vodafone have found that one in four British parents (25 per cent) are concerned that their young families are using digital products too much, with 15 per cent of worried parents even lying about it to friends and family because they don’t know the appropriate amount of time kids should be online each day.

As part of its new Digital Behaviours study, Vodafone looked in-depth at the habits of 12 connected families from around the UK, and surveyed more than 2,100 other British residents on their tech tendencies(1).

53 per cent of British Mums (and 43 per of Dads) believe they have failed to cut down their children’s screen time. Many admitted to having been caught out by their kids finding ways around imposed rules, with a common excuse being they need to do their homework digitally.

However, parents in 22 million homes across Britain now have the power to manage their family’s internet usage effectively and without resistance with Vodafone’s new broadband service. The service works seamlessly with a companion app, the first app of its kind for home broadband, which gives users the ability to schedule when Wi-Fi is available and when it’s not on certain devices. Users can even set timers for the service to turn itself off when it’s time for bed making sure that children and workaholics alike are able to switch off properly.

Common reasons for parental denial include technology being a part of everyday family life, educational commitments, lack of restrictions and a tendency to use technology to distract their children. One in three parents (34 per cent) have also admitted they struggle to set a positive example due to their own dependency on connected devices.

The Digital Behaviours study also found that more than half the nation (58 per cent) admitted to being connected to the internet all day, with young professionals the worst offenders, and more than one in ten (14 per cent) spending a minimum of 11 hours on digital devices per day.

“I think generally the positives of using devices do outweigh the negatives but you have to be proactive and police the use of them, which isn’t always easy,” said Rory, a 42 year-old dad of young kids from Egham. “If we just let our twins do whatever they want on them they will automatically default to watching rubbish, which is OK, but only in small doses. My wife will set them particular tasks like ‘go and find me something about the Romans’ or ‘find me three different types of dinosaur’. This type of usage helps with school work.”

The percentage of UK adults using smartphones has shot up from 39 per cent to 66 per cent in the past three years, with the number of phone users with 4G high-speed mobile internet growing almost tenfold from 2.7m to 23.6m over the course of just 12 months between January and December 2014(2).

“Connected devices and immediate access to the internet have become a huge part of everyday life for many families, both parents and children,” said Cindy Rose, Consumer Director at Vodafone UK. “However if you’re concerned about your families usage, don’t worry what other people are doing, focus instead on finding a balance between screen time and other activities that works for you. Vodafone Broadband helps parents to manage their family’s internet usage in a less confrontational fashion than just taking devices away, allowing them to make sure that family time is just that.”

As part of its work to help educate families on digital devices, Vodafone has recently published the latest issue of its Digital Parenting magazine – full of tips on how to help kids stay connected safely and manage their screen time constructively. The latest issue can be viewed here: http://vodafonedigitalparenting.co.uk/.

(1) This study into digital behaviours was conducted by Vodafone and Bryter between 26 and 27 September 2015, comprising an in-depth study of 12 UK families and 2,103 UK respondents.