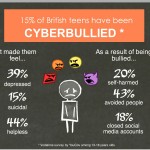 One of the largest global surveys of its kind, spanning 11 countries and almost 5,000 teens, reveals one in five teens cyberbullied, a fifth of whom felt suicidal.

More than half of teenagers think cyberbullying is worse than face-to-face bullying and 43 per cent believe it to be a bigger problem for young people than drug abuse, a global online survey of around 5,000 teenagers across 11 countries* has revealed. The Vodafone survey, commissioned from YouGov, found that an average of around one in five (18%) teens across the countries surveyed had been cyberbullied and, as a result:

Forty-three per cent of those surveyed would find it hard to support a friend who had been bullied on social media, as they ‘could not find the right words’ to show support. Seventy-two per cent of teens said they would be likely to use an emoji to express compassion or support for friends being cyberbullied.

In response to the findings, Vodafone today announces the #BeStrong anti-cyberbullying emoji initiative, which involved the creation of a suite of ‘support emojis’ to raise awareness of the importance of conveying compassion, sympathy and support when friends are being bullied online. The emojis were chosen by the 4,720 teens surveyed from a wide selection designed by Vodafone and its anti-bullying panel as their favourite symbols for compassion and support. The favourite two sets of emojis can be seen below.

The images will be available from today on Vodafone and Vodafone Foundation social media platforms as part of a donation campaign. The Vodafone Foundation, Vodafone’s philanthropic arm, announces as part of its digital family programme that it will help raise funds for anti-bullying NGOs by donating 10p (14 cents) for every Twitter retweet or public Facebook like of Vodafone’s image of the #BeStrong emojis*.  The company is also talking to the major emoji app and social media platforms towards featuring the emojis on their platforms in the near future.

The idea for a ‘support emoji’ was first brought to Vodafone by anti-bullying ambassador Monica Lewinsky, who has been a consultant on the initiative, working alongside semioticians (who study signs and symbols and their use or interpretation), anti-bullying NGOs including The Diana Award, ENABLE, a European Union project to help combat bullying, and Berkeley University Professor Dacher Keltner – the psychologist who advised on the creation of the characters for Pixar film Inside Out.

Commenting in a new video released today, Professor Keltner explains the importance of teens being able to offer support and show sympathy to their peers being cyberbullied. He said: “A lot of emojis can be limited for communicating emotions.  The bystander needs better tools.  Specific emojis that they can send their friends to show that they are there for them.”

Vodafone and NGO The Diana Award have also released a series of learning modules aimed at teenagers, which cover subjects from ‘selfies ‘and ‘online gaming’ to ‘social networking’ and ‘mean tweets’. Further learning modules will be released over the next year on www.vodafone.com/parents , by NGOs including The Diana Award and by many of Vodafone’s markets. Each module provides resources needed for teachers to train a small group of students to deliver short lessons to other students at school. The modules also include advice for parents.

Today also marks the release of the fourth edition of Vodafone UK’s Digital Parenting magazine, which has been developed in partnership with parenting NGO The Parent Zone.  One million copies of the magazine, which aims to offer help and advice to parents and guardians trying to help their children navigate the increasingly complex digital landscape, will be distributed to schools, NGOs, government bodies, children charities and many other outlets over the next year. The magazine is available online at: http://vodafonedigitalparenting.co.uk/

Vodafone Foundation Director Andrew Dunnett, said: “The results of the global survey – which we believe to be one of the largest of its kind among teenagers in so many countries – will be a serious concern for any parent. The new generation that was born digital thrives in a world of constant connectivity, but there are clear risks for young people as well as benefits – and it is striking that cyberbullying troubles many young people more than drug abuse. Our research showed many teenagers find it difficult to help their friends when cyberbullying is happening, and the #BeStrong campaign has been created to help them convey emotional support”.

Vodafone is one of the world’s largest telecommunications companies and provides a range of services including voice, messaging, data and fixed communications. Vodafone has mobile operations in 26 countries, partners with mobile networks in 55 more, and fixed broadband operations in 17 markets. As of 30 June 2015, Vodafone had 449 million mobile customers and 12 million fixed broadband customers. For more information, please visit: www.vodafone.com.

About the Vodafone Foundation

* All figures, unless otherwise stated, are from YouGov Plc. Total sample size was 4,720 13-18 year olds in the UK, Germany, Italy, Spain, Netherlands, New Zealand, Greece, South Africa, USA, Ireland & the Czech Republic. The figures have been given an even weighting for each country to produce an ‘average’ value.

Images of the emojis can be found here https://www.flickr.com/gp/vodafonegroup/pK5215

Survey highlights across the 11 countries

To what extent, if at all, do you agree or disagree with the following statement? Cyberbullying is worse than bullying face to face/ in person

Children surveyed in the Czech Republic are the least likely to have personally been cyberbullied of the 11 countries surveyed.

Of those children surveyed in New Zealand who said they had personally been bullied, over 3 in 5 reported feeling upset (62%), over half said they were angry with the bully (53%) and 47% said they felt depressed.

Of the children surveyed from the UK who had said they had been cyberbullied, over half (54%) said it made them think of themselves in a more negative way.

Through which ONE of the following ways do you think you would find it **easier** to express your feelings or views to them?

The majority of children surveyed in South Africa (60%), the Czech Republic (58%) and New Zealand (54%) said they found it easier using a combination of both emojis and words

How likely or unlikely would you be to share with them an emoji that has been created to show support/ compassion for people who are being cyberbullied (e.g. on social media, via text message etc.)?

Children aged 13-18 surveyed in South Africa would be most likely to share an emoji that has been created to show support/ compassion for people who are being cyberbullied (90%), followed by Italy (83%) and Greece (77%)