#Goldilocks: A fairy tale for the digital age 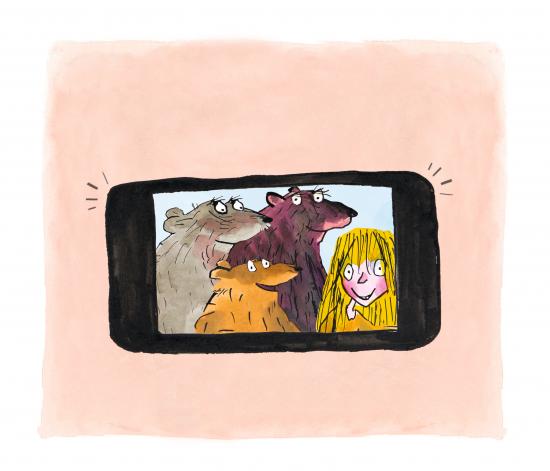 Vodafone UK and Andersen Press have launched #Goldilocks, a new book to help parents and children talk about social media and how to use it responsibly.

Vodafone UK and Andersen Press have launched #Goldilocks, a new book to help parents and children talk about social media and how to use it responsibly.

The book marks the launch of Vodafone’s new Digital Parenting website, a go-to-guide for parents on the latest digital safety and wellbeing issues. #Goldilocks, written by Jeanne Willis and illustrated by Tony Ross, is available to download for free at www.vodafone.co.uk/digitalparenting.

New YouGov research released today shows that many children are both aware of and using social media from a young age. This is often before parents have had conversations with them about how to use social media safely and responsibly. The findings show that 48% of children are aware of social media by the age of seven.

Parents are the first port of call for the majority of children for advice on their digital lives. 93% of children aged six to ten say they would speak to their parents if someone said or did something to upset them online.

In light of the findings, Digital Parenting, which is funded by the Vodafone Foundation, is encouraging parents to discuss how to use social media safely and responsibly with children from the age of seven. The printed guide and website offers support to parents who want to understand their children’s online world.

Helen Lamprell, General Counsel & External Affairs Director of Vodafone UK, said: “Social media can be a great way for young people to communicate, be creative and develop their digital skills. We know parents want to talk to their children about how to use social media safely and responsibly, but often aren’t sure how. #Goldilocks offers a fun, accessible way to start the conversation with younger children, who we know are increasingly aware of, and using, social media.”

#Goldilocks is a new resource to help parents have conversations about being kind to others on social media and asking permission before posting pictures online. The much-loved children’s tale has been reimagined for the digital age by award-winning author Jeanne Willis (Slug Needs A Hug, Tadpole’s Promise and Who’s in the Loo?) and the UK’s number one illustrator Tony Ross (Horrid Henry, Gangsta Granny and the Little Princess series). In the new version, #Goldilocks gets into trouble with the three bears over her quest for likes on social media. The aim is to educate children about the potential consequences of being unkind, getting carried away with selfies or oversharing images in a fun and accessible way.

#Goldilocks author Jeanne Willis said: “Technology and the internet are so prevalent in children’s lives these days. I wanted to create a simple and enjoyable solution for encouraging parents to speak to their children about how best to manage the issues that come with it. Partnering with Digital Parenting felt like a natural development and I am looking forward to helping spread the message of talking to children about their online lives with them.”

The seventh edition of Digital Parenting is available now.  For more information and to download your free edition of #Goldilocks visit: www.vodafone.co.uk/digitalparenting.

All figures, unless otherwise stated, are from YouGov Plc. Total sample size was 4,189 of which 352 were parents of children aged 6 to 10. Fieldwork was undertaken between 13th – 15th November 2018. The survey was carried out online. The figures have been weighted and are representative of all GB adults (aged 18+).

Digital Parenting is a programme from the Vodafone Foundation (UK registered charity no.1089625). It gives parents the knowledge and tools they need to have important conversations with their children about the digital world so their families can get the most out of and navigate it safely. It has been provided as a printed resource for over six years and is now available online at www.vodafone.co.uk/digitalparenting.

Andersen Press is a leading independent children’s publisher, and home to some of the biggest names in the world of children’s books, including the much-loved picture book characters Elmer the Patchwork Elephant and the Little Princess.  Andersen Press is the publisher of many award-winning authors and illustrators including Melvin Burgess, Rebecca Stead, Susin Nielsen, Julian Clary, David Roberts, Tony Ross, David McKee, and Jeanne Willis. The company was founded in 1976 by Klaus Flugge.

Jeanne Willis is an award-winning children’s author and scriptwriter known for writing about children and technology in her books Chicken Clicking and Troll Stinks! She had her first picture book published by Andersen Press at the age of 21, and since then she has won the Silver Medal Smarties Prize (Tadpole’s Promise), the Nasen Special Needs Award (Susan Laughs), the Sheffield Children’s Book Award (Who’s in The Loo?) and the Red House Children’s Book Award (Bottoms Up). Jeanne has also worked on scripts for TV, including Polly Pocket and The SIow Norris, and a pilot TV series for Dr Xargle. She lives in North London with her husband.

Tony Ross has been illustrating books for over 40 years, and has been published all over the world. He is perhaps best known for his much-loved Little Princess series, which has been adapted for TV and is currently showing on Channel 5’s Milkshake, and for his collaboration on David Walliams’ best-selling children’s books. Tony’s books have been shortlisted for the The Laugh Out Loud Book Awards (Slug Needs a Hug) and the Kate Greenaway (Dr Xargle’s Book of Earth Tiggers), and Tadpole’s Promise won the Silver Medal Smarties Prize. He has been named as the best-selling illustrator in the UK for three years in a row, and he is the UK’s libraries’ most-borrowed illustrator. He lives in Rutland.