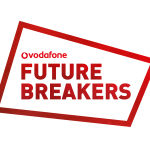 Glasgow based singer-songwriter Ryan Lawrie is celebrating after being the first member of the public to win Vodafone’s Future Breakers monthly competition, giving the unsigned nineteen year old a fantastic platform to launch his budding music career. The Future Breakers  initiative, launched last month as part of the Vodafone Big Top 40 partnership with Global, has given Ryan the money-can’t-buy chance to record and produce his single ‘If Only’ with industry professionals, as well as having the live session broadcast online with the Big Top 40.

Before his big break, Ryan worked on his song-writing from the age of 15 and then began performing in pubs and venues across Glasgow over the last few years.  With inspiration from the likes of The 1975, Justin Bieber and The Rolling Stones, Lawrie hopes this will be a stepping stone to something bigger and is planning an EP release in the summer.

On his experience with Vodafone Future Breakers, Ryan commented; “I have loved every moment since I found out I had won and have really enjoyed the whole creative process of making songs in the studio. The experience of being here has been great, and performing in this surrounding with so many talented people around me – it’s been amazing!  Thanks to Vodafone and Global for giving me my big break! ”

Fronted by the Vodafone Big Top 40’s very own Marvin Humes, Vodafone Future Breakers is continuing the search for the very best unsigned talent from across the UK to uncover the next big thing in music or ‘future breaker’.  Listeners, budding artists and band members can enter their tracks/videos through the dedicated hub where they could win a recording studio session with a top industry producer!