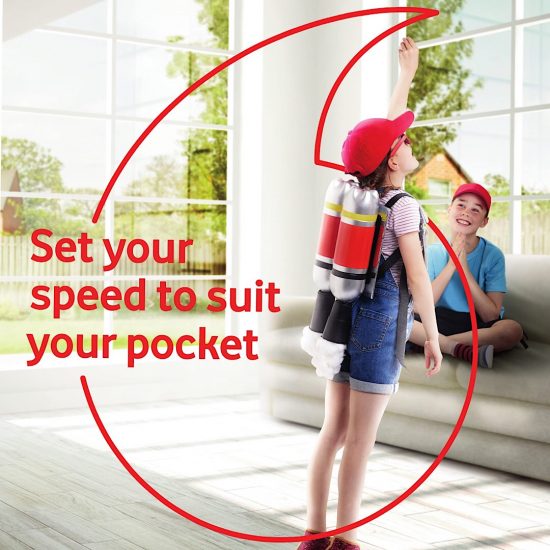 Vodafone Gigafast Broadband, with download and upload speeds 20 times and 150 times faster than the average fixed broadband connection in the UK, is available to pre-order from Friday, 14 September 2018 in Milton Keynes.

Vodafone Gigafast Broadband, with download and upload speeds 20 times and 150 times faster than the average fixed broadband connection in the UK, is available to pre-order from Friday, 14 September 2018 in Milton Keynes.

Customers can choose from four Vodafone Gigafast Broadband packages: 100, 200, 500 or 900Mbps, with prices starting at £28 per month (see pricing details below) and installations commencing on 8 October 2018. A discount of £5 per month is available to customers that already have a Vodafone mobile contract.

Unlike most broadband services, Vodafone Gigafast Broadband sends data over a pure optical fibre network at every stage of the connection, rather than over old copper-based telephone cables. This full fibre service is not only faster and more reliable, it provides identical upload and download speeds.

Following a successful pilot scheme over the summer, Gigafast Broadband will initially be available in Milton Keynes to more than 3700 eligible homes. Almost every home in the city is expected to have access by 2020. Aberdeen and Peterborough will follow later this year with Coventry, Edinburgh, Huddersfield and Stirling coming online in early 2019. With Gigafast Broadband, Vodafone will help bring full fibre to households that currently do not have gigabit-capable connections, providing a vital boost to the market and the economy.

Vodafone UK Chief Executive Nick Jeffery said: “Starting in Milton Keynes, we are helping people break free from the shackles of their old, copper-based broadband.  With Gigafast Broadband, Vodafone is investing in best-in-class infrastructure for the UK, equipping the nation for the future.”

At 900Mbps, Vodafone Gigafast Broadband allows customers to download a video game for PS4 or Xbox One (50GB) in eight minutes rather than two hours and 40 minutes. They will be able to save 32GB of photos, videos and documents to the cloud in five minutes instead of 12 hours and 40 minutes.

Vodafone’s most advanced router yet (see Note to Editors for details) is included free of charge. This is in addition to free installation worth £49, unlimited data usage, home phone service, free Vodafone content controls and anti-virus software free for six months.

* All prices quoted include VAT

The new Vodafone Broadband Router is an 802.11ac router that can give customers a fast and reliably strong WiFi signal using an array of advanced technologies such as a seven antennae arrangement and beamforming. The new Vodafone Broadband Router also has four Gigabit Ethernet ports for wired connections, two USB ports and works as a hub for customers’ home phone. Despite all of this, it is sleek and minimalist with no ugly, protruding, easy-to-break antennae.