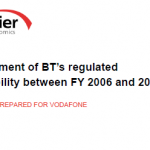 As part of its submission to Ofcom’s Digital Communications Review, Vodafone UK recently commissioned Frontier Economics to update its analysis of data from BT’s regulatory financial statements (RFS) since the implementation of the 2005 Ofcom strategic review (of telecommunications) to assess the effectiveness of the regulatory framework in balancing the consumer benefits of lower prices with the need to provide incentives to invest in networks and operate these networks efficiently.

This analysis is based on comparing the level of profitability for BT’s regulated services, expressed as a return on capital, against Ofcom’s estimate of BT’s cost of capital. The Frontier analysis shows that over the period April 2006 to 31 March 2015:

The conclusion to the report is that BT’s returns for regulated services overall have been consistently above a benchmark rate based on Ofcom’s determinations of the return required by investors. This implies that prices overall have been set at a higher level than that required to provide investors in BT with an appropriate rate of return: in other words, prices could have been lower and BT’s investors would have still been adequately compensated. We estimate that BT’s regulated prices would have been 11% lower on average, had BT’s regulated returns been in line it the cost of capital.