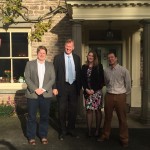 Vodafone UK has announced the beautiful rural community of Fownhope in Herefordshire as the latest community in a rural mobile not-spot location to receive 3G coverage with Vodafone’s Rural Open Sure Signal (ROSS) programme.

Situated on the banks of the River Wye in the beautiful Herefordshire countryside, Fownhope has until now suffered from unreliable mobile coverage and slow network speeds. The ROSS programme uses Vodafone’s innovative Sure Signal technology to bring high quality 3G voice services and much needed access to the internet via mobile devices to communities in some of the UK’s most beautiful and remote areas.  About the size of a cereal box, the Open Sure Signal units connect to existing broadband lines to create 3G coverage, and are installed high up on chimney breasts or the eaves of buildings.

Jorge Fernandes, Vodafone UK Chief Technology Officer, said: “I am delighted that Fownhope has joined our Rural Open Sure Signal programme. Mobile connectivity is an essential service for communities and businesses to thrive in today’s digital world and support local economies. As part of the Rural Open Sure Signal programme, we are committed to investing in our network to provide access even in remote locations where it is otherwise almost impossible to reach. The number of calls and data sessions the unit is supporting every day, in an area where there was marginal coverage previously, shows the significant benefit the technology is making to members of the community. I am excited to see the transformation for Fownhope and other communities which have been successful for this pioneering programme.”

Bill Wiggin, MP for North Herefordshire said: “When the proposed mast was cancelled I met local people to discuss how we could get a service that worked for Fownhope. We needed the new fibre optic broadband cable to be connected to get on to the Vodafone Rural Open Sure Signal (ROSS) programme, a national initiative by Vodafone UK to provide reliable mobile access to rural communities. Following my presentation of a petition to the Rt Hon Sajid Javid MP, Secretary of State for Culture, Media and Sport at the time, and a number of questions to the Government and phone providers Fownhope was accepted to the ROSS programme which has now gone live. This is an excellent outcome for Fownhope and I am delighted to have been able to play my part in delivering this important win for the community. This campaign and the successful outcome has made me rethink my current mobile phone provider, as Vodafone has demonstrated a real commitment to solving the problems of mobile phone signal for those in rural communities.”

As well as using Rural Open Sure Signal to plug rural “not-spots”, Vodafone is spending around £2 billion on its network and services across the country over 2014 and 2015.  This includes the provision of HD (High Definition) Voice technology on its 3G network and the extension of its 4G coverage to 679 cities and towns and thousands of smaller communities across the UK.