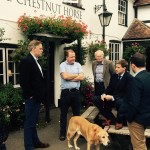 The beautiful rural communities of Easton and Itchen Abbas (Hampshire) as the latest notspot communities to receive 3G coverage with Vodafone’s Rural Open Sure Signal programme.

Vodafone UK has announced the beautiful rural communities of Easton and Itchen Abbas (Hampshire) as the latest community in a rural mobile not-spot location to receive 3G coverage with Vodafone’s Rural Open Sure Signal programme.

Situated in the Itchen Valley, Easton and Itchen Abbas have until now suffered from unreliable mobile coverage and slow network speeds.  The Vodafone Rural Open Sure Signal (ROSS) programme uses Vodafone’s innovative Sure Signal technology, to bring high quality 3G voice services and much needed access to the internet via mobile devices to communities in some of the UK’s most beautiful or remote areas.

Jorge Fernandes, Vodafone UK Chief Technology Officer, said: “I am delighted that Easton and Itchen Abbas have joined our Rural Open Sure Signal programme. Mobile connectivity is an essential service for communities and businesses to thrive in today’s digital world and support local economies. As part of the Rural Open Sure Signal programme, we are committed to investing in our network to provide access even in remote locations where it is otherwise almost impossible to reach. I am excited to see the transformation for the Itchen Valley and other communities which has been successful for this pioneering programme.”

Steve Brine, MP, Winchester and Chandler’s Ford said: “I am very pleased to see this new ROSS system up and running. I have been working hard with Hampshire County Council and government on rural broadband issues, and having spoken to countless people in the area, I know this will be very warmly welcomed indeed.”

Henry Labram, Village champion for Itchen Valley commented: “This is a big step forward in getting an improved mobile connection for the Itchen Valley. Visitors to the area as well as residents will benefit. It started with the Parish Plan, completed last summer, when residents said that lack of a good mobile signal was a serious problem for the area. We then learnt that Vodafone were offering their ROSS system for free, and with local MP Steve Brine’s strong support, the system is now in place. There has been much more to organise than you might think, including a number of site surveys and visits by engineers, and the Vodafone team have been very helpful. Technology can bring so many good things, and keeping up is really important”.

As well as using Rural Open Sure Signal to plug rural “not-spots”, Vodafone is spending around £2 billion on its network and services across the country over 2014 and 2015.  This includes the provision of HD (High Definition) Voice technology on its 3G network and the extension of its 4G coverage to 645 cities and towns and thousands of smaller communities across the UK.

Further communities will be announced over the few months. For more information on the programme, visit www.vodafone.co.uk/rural