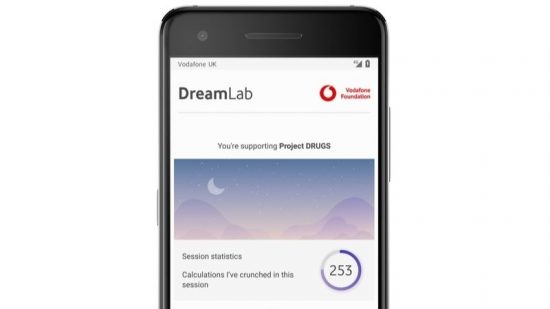 The Vodafone Foundation and researchers at Imperial College London have teamed up to recruit smartphone users to help in the fight against cancer via an app that crowd sources the processing power of mobile phones overnight.

The Vodafone Foundation and researchers at Imperial College London (Imperial) have teamed up to recruit smartphone users to help in the fight against cancer via an app that crowd sources the processing power of mobile phones overnight.

The DreamLab app, developed by the Vodafone Foundation, uses the collective processing power of smartphones to help analyse huge volumes of data. As part of the project, called DRUGS (Drug Repositioning Using Grids of Smartphones), a team led by Dr Kirill Veselkov from Imperial’s Department of Surgery & Cancer, has designed an algorithm that breaks down enormous datasets into small chunks. Through DreamLab, these small data chunks will be analysed by a network of smartphones to find links between datasets which could help identify more effective combinations of existing drugs to treat cancer. While traditional cancer treatment methods are dictated by the type of cancer tissue a patient has, this research aims to use genetic profiles to find the best cancer treatment for individuals.

Using this mobile cloud-based processing approach aims to reduce drastically the time taken to analyse the vast amount of data that exists. A desktop computer with an eight-core processor running 24-hours a day would take 300 years to process the data. But a network of 100,000 smartphones running six hours a night could do the job in just three months.

As an indication, a new device can run up to 60 calculations, solving up to 24,000 problems in six hours if fully charged and plugged in.

Researchers believe that in the long run this work could speed up access to effective drugs and enable tailored treatments for patients.

Health Minister Lord O’Shaughnessy said: “The DreamLab app is an ingenious way of using everyday technology to help beat cancer. Using our phones’ idle processing power while we sleep, the app sequences genetic profiles to match drugs to different forms of cancer. I’ve downloaded it and I hope others do too.”

Andrew Dunnett, Director of the Vodafone Foundation, said: “DreamLab is a great example of the transformative power of connectivity and technology. This innovative app gives everyone the chance to play a part in the fight against cancer while they sleep. We hope DreamLab will significantly increase the speed at which Imperial College and other researchers are able to make breakthroughs in cancer research, ultimately saving lives.”

Dr Kirill Veselkov, said: “We are currently generating huge volumes of health data around the world every day, but just a fraction of this is being put to use. By harnessing the processing power of thousands of smartphones, we can tap into this invaluable resource and look for clues in the datasets. Ultimately, this could help us to make better use of existing drugs and find more effective combinations of drugs tailored to patients, thereby improving treatments.”

Professor David Gann CBE, Vice President (Innovation) at Imperial College London, said: “Through harnessing distributed computing power, DreamLab is helping to make personalised medicine a reality. This project demonstrates how Imperial’s innovative research partnerships with corporate partners and members of the public are working together to tackle some of the biggest problems we face today, generating real societal impact.”

The app is free to download and free to use for Vodafone customers, meaning it does not eat into monthly data allowances. The app can also be used across other networks, with users choosing how much data they wish to donate, or connecting via Wi-Fi.

To download the app please search for DreamLab in the App store for iOS or Play Store for Android.

Compatible Android/iOS device required. Downloading DreamLab will consume data. Once downloaded, DreamLab can be used when your device is connected to a charging source and has mobile network or WiFi connectivity. Mobile data to use DreamLab is free for Vodafone UK customers on the Vodafone UK network. Vodafone UK Enterprise customers using a non-Vodafone APN setting or VPN will be charged according to their mobile price plan. Roaming incurs your standard international rates. Terms apply see Vodafone.co.uk/dreamlab. Vodafone Foundation, UK registered charity number 1089625.