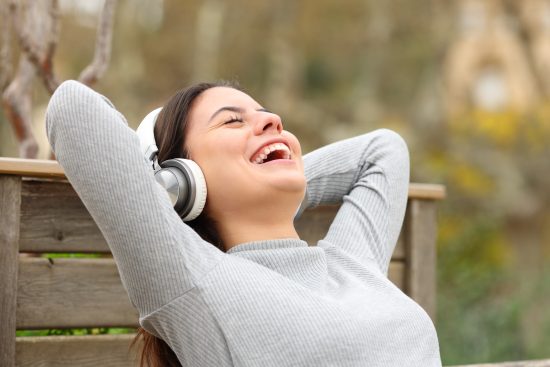 Listen to podcasts offline and on the move with Spotify Premium, free for up to 24 months, when signing up for one of Vodafone’s entertainment plans.

New research from Vodafone has revealed that we are a country of podcast lovers, with 69% of UK respondents saying they listen to podcasts at least once or twice a week. The Peter Crouch Podcast, Newscast and Parenting Hell rated among some of the most popular podcasts in the study.

Vodafone’s findings also hinted that the nation was in need of a light-hearted listen following two years of pandemic doom and gloom with comedy taking the top spot (30%), while entertainment (25%), sport (23%) and true crime (19%) followed. Notably, drama was identified as the least popular podcast genre (12%).

Scotland took the crown for having the most political podcast fans (24%). Yorkshire and the Humber was revealed as the most sports-mad region of the UK with more than a quarter (28%) of podcast lovers listening to sport-related content. While the South East cited comedy podcasts as their most favoured genre (38%).

Elsewhere, the Welsh were identified as most likely to favour podcasts about personal development (23%), Northern Ireland took the lead when it comes to true crime (29%), and South West residents are most likely to listen to shows on health and fitness (21%).

The study, which polled 2,000 adults across the UK, found that podcast listenership is up 40% compared to before the COVID-19 pandemic. More than three-quarters of the country choose to listen to podcasts while they’re on the move, through Spotify and other streaming platforms. Smartphones are used five times more than any other device, such as a laptop or TV, to access podcasts.

Almost a third of Londoners (31%) said they listened to podcasts while commuting, making England’s capital most heavily dependent on audio shows during the trip to work. In Northern Ireland, almost a third of people (32%) said they will listen to a show while walking their dog.

Beyond entertainment purposes, almost six-in-10 inner-city Brits (57%) said they had been inspired to change something in their life after listening to a podcast. The research revealed that some of the biggest lifestyle changes people have undertaken after listening to a podcast include eating more healthily (17%), exercising more (16%), or learning a new skill (17%). One-in-five people also said a podcast had inspired them to change careers – this figure dropped to just 3% of those who live in a rural area, village or small town.

The UK is one of the largest and fastest growing podcast markets for Spotify globally with independent research showing that 59% of the UK population now listens to podcasts. Spotify podcasts have seen huge growth over recent years with Originals and Exclusive content on the platform reaching a wide range of diverse audiences, including long-time fans as well as those coming to podcasts for the first time. These include Spotify Exclusive Call Her Daddy with host Alex Cooper leading raw, relevant and provocative conversations with her guests; Spotify Original Who We Be TALKS, giving you everything you need to know about the beating heart of Black culture from the people who shape it, and Spotify Exclusive JaackMaate’s Happy Hour, with Jaack and Stevie inviting the internet’s biggest celebrities to chat about everything from life’s big questions to the hot internet topic of the day.

Enjoy these podcasts – and many more – on Spotify Premium with your Vodafone Pay Monthly mobile plan.
Find out more

Max Taylor, Consumer Director, Vodafone, said: “A huge number of us listen to podcasts when we’re out and about. Our love for comedy podcasts, as shown in the research, proves we’re a nation that loves to laugh. Popular streaming services such as Spotify have gone from strength-to-strength during the pandemic and they’re here to stay. The huge growth of podcasts during the last decade has been nothing short of spectacular.

“Part of their appeal is you can listen to your favourite shows from wherever you are, as well as being able to stream them while you’re on the move – whether that’s popping to the shops or while on the school run. With Vodafone’s award-winning network for reliability and our exclusive content partner Spotify, you can be confident that you’ll be able to listen to your favourite podcasts wherever you are.”

Tom Connaughton, UK Managing Director, Spotify, said: “Whoever you are and whatever you’re listening to, you can find the most interesting, diverse and authentic voices in the world on Spotify. As more and more people turn to podcasts, our listeners are finding voices that resonate with them, reflect their passions, and help them to make Spotify their own.”

Podcasts have been identified as a popular conversation starter among much of the country, with more than half of respondents (58%) admitting they discuss or recommend shows to friends or family. That Peter Crouch Podcast, Newscast and Parenting Hell rated among some of the most popular podcasts in the study.

Notes to Editors
Survey conducted by OnePoll for Vodafone, with a sample of 2,000 UK adults in February 2022.

About Spotify
Spotify transformed music listening forever when it launched in 2008. Discover, manage and share more than 82 million tracks, including more than 3.6 million podcast titles, for free, or upgrade to Spotify Premium to access exclusive features for music including improved sound quality and an on-demand, offline, and ad-free music listening experience. Today, Spotify is the world’s most popular audio streaming subscription service with 406m users, including 180m subscribers, across 184 markets.

Working from home: How to link your smartphone to your TV