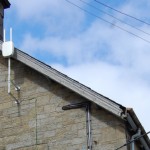 Caldbeck, in the borough of Allerdale, Cumbria is to trial a ‘community-led network’ that is bringing much needed Vodafone coverage to homes and businesses in the area. Working with the community and local MP Rory Stewart, Vodafone has installed ground breaking Open Sure Signal in locations across the village of Caldbeck to provide 3G coverage throughout the community, where before there was little or no coverage from any network.

The Open Sure Signal provides a Vodafone 3G signal in areas which traditional mobile coverage has been unable to reach. The units, about the size of a small carry on suitcase, use existing broadband services to deliver a 3G mobile signal. They have been placed in a number of business and residential locations across the village to give a good spread of coverage, including the Village Hall, the Oddfellows Arms, the Surgery and the Bowling Club.

Rory Stewart, MP for Penrith and the Border, commented: “It is fantastic to be making real progress with Vodafone on such an innovative pilot here in Caldbeck. Alongside broadband, the importance of good mobile coverage for rural communities cannot be understated, for both businesses and residents alike. This pilot offers those rural communities in mobile “not spots” the opportunity to finally overcome the barriers of geography and distance that have, up until now, made it impossible to provide such a service affordably. Cumbrian communities are again showing that our rurality should not prevent us from access to good mobile or broadband coverage, and that by taking the lead, and working with telecommunication companies, we can solve the problem ourselves.”

Martin Bell, the Parish Hall Committee Chairman for Caldbeck, added: “We are delighted that Caldbeck was chosen to be part of this innovative scheme by Vodafone. Rural communities such as ours can suffer from being mobile black out areas. Having a signal here has made a vast difference to both locals and visitors. The whole community has already seen the benefits from both a business and personal perspective of having a strong Vodafone 3G voice and data signal.”

Paul Morris, Head of Government Affairs at Vodafone UK added: “Caldbeck has shown how partnership can provide a solution to solving the challenge of how to bring mobile coverage to rural communities. Without the direct support and engagement of the local community and MP, Rory Stewart, this project would not have been possible. It’s the latest area to benefit from our rural mobile coverage trials and we hope it will not only help keep people in touch but also boost the local economy.”