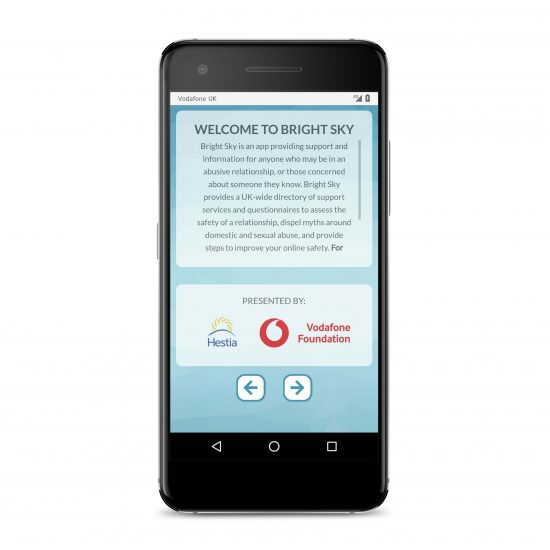 According to a survey by Hestia, 1 in 3 people in the UK would not know how to help a friend or family member who was a victim of domestic abuse. The findings highlight the need for Bright Sky, the first smartphone app to provide a UK-wide directory of specialist domestic abuse support services. Bright Sky enables users to locate their nearest support centre by searching their area, postcode or current location.

Designed to log incidents of domestic abuse without any content being saved on the device itself, the app enables users to record incidents in a secure journal tool, using a text, audio, video or photo function.

The app provides comprehensive support and information to people affected by abuse, and also acts as a resource and source of advice for people wanting to help others. A short questionnaire helps users assess the safety of a relationship and there is information about different forms of abuse, the types of support available, steps to consider if leaving an abusive relationship and how to help a friend affected by domestic abuse.

The Bright Sky app brings together the Vodafone Foundation’s expertise from its work with TecSOS – the technology it developed to help people at the highest risk of domestic violence – and Hestia’s wealth of experience in supporting those affected by domestic abuse.

The Hestia survey, carried out by market research company Opinium, also found that:

The Bright Sky app is part of the Vodafone Foundation’s portfolio of TecSOS products and services, which use technology and connectivity to support people affected by domestic abuse. Previous TecSOS technology has helped over 82,000 vulnerable people across five countries. The specially-adapted technology enables users to contact the police quickly and discreetly when they feel under threat.

Since it launched in the UK in 2011, TecSOS has been adopted by 40 out of 43 UK Police forces and has given over 14,000 UK users a sense of protection and security, with over 1,900 activations in the UK alone. TecSOS was credited with saving at least seven lives over an eight-month period in an independent evaluation of one Police Force. The initiative also operates in Spain, where the project was originally developed, Ireland, Germany and Portugal.

The Bright Sky app is available in English, Urdu, Punjabi or Polish and is free to download on both iOS and Android devices on the App Store and Google Play Store. To learn more about the app, please visit: http://www.hestia.org/brightsky/

“The Government’s consultation on domestic abuse, which closes at the end of May, is designed to transform society’s response to how we tackle these devastating crimes.

“However, with nearly two million people in Britain abused each year by those closest to them, we must combine new laws and intervention projects with better practical support for victims.

“The new Bright Sky app is precisely the type of initiative which can help victims, families and their friends reach the help and support they need.”

“The Vodafone Foundation is committed to using connectivity and technology to support vulnerable people. Domestic abuse affects families right across the UK. Building on our TecSOS programme, which has helped thousands of people experiencing domestic abuse over the past seven years, Bright Sky aims to support those affected by abuse and provides a resource for people wanting to help them.”

“Domestic abuse sadly touches the lives of everyone in the UK, either directly or through our friends, family and colleagues. For someone who is a victim of domestic abuse, the support they get from their friends and family can be lifesaving. It is heart-breaking to think that so many of us wouldn’t know how to help our loved one in their hour of need. Bright Sky’s innovative features can put an end to this. By simply downloading the app onto our phone, we can all play our part in ending domestic abuse.”

Full copies of the report ‘#WhatICanDo: Friends & Family’ & the Bright Sky FAQ are available on request

Bright Sky is a free app providing support and information for anyone who may be in an abusive relationship, or those who are concerned about someone they know. You can download Bright Sky for free on both iOS and Android devices on the App Store and Google Play Store.

In 2015 Hestia formed a partnership with Aspirant to explore digital solutions to support victims of domestic abuse. V.1 was released in 2016 with the aim of reducing the amount of time and the number of people a victim of abuse speaks to before they access the support that they need.

In 2017 Hestia partnered with TecSOS (supported by Thames Valley Partnership and the Vodafone Foundation) to expand Bright Sky and improve on its design and usability with enhanced content on sexual violence, online abuse, stalking and harassment, three additional languages and an expanded directory of services. Additional funding was supplied by Comic Relief and the Home Office.

At Hestia, we support adults and children across London in times of crisis. Last year we worked with more than 9,000 people including women and children who have experienced domestic abuse, victims of modern slavery, young care leavers and older people. From giving someone a home to helping them to get the right mental health support, we support and enable people at the moment of crisis.

Hestia is also the home of UK SAYS NO MORE, a national campaign to raise awareness of domestic abuse and sexual violence across the UK. UK SAYS NO MORE Week takes place 21st – 27th May 2018.

About the Vodafone Foundation

For more than six years, the Vodafone Foundation has been investing funds through their TecSOS project to use connectivity to help support those affected by domestic abuse in the UK and across Europe. As part of a commitment to scale solutions for the benefit of more vulnerable people in the UK, the Vodafone Foundation supported the expansion of the TecSOS portfolio of products, including the development of the Bright Sky app, in partnership with Hestia.