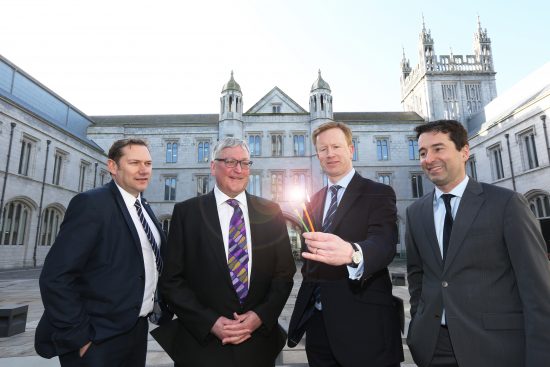 CityFibre is to invest at least £40 million in full fibre infrastructure for the Granite City in partnership with Vodafone.

Aberdeen is set to become a forerunner for digital transformation in Scotland with the announcement of a new Gigabit-capable full fibre broadband network as part of the Vodafone and CityFibre Fibre-to-the-Premises (FTTP) programme.

The Vodafone and CityFibre partnership will mean that Aberdeen becomes Scotland’s first city in which nearly every home and business will have access to gigabit-speed broadband. It will also help the Scottish Government achieve their ’Reaching 100%’ ambition of making Scotland one of the best connected places in Europe, unlocking its full potential in a digital world. CityFibre will invest at least £40 million of private funds in the city-wide roll-out.

Fibre optic cables are used for every stage of the connection, from the customer’s home or business to the Internet. This means Vodafone will be able to provide customers with ultrafast and reliable broadband services capable of Gigabit speeds (1,000 Mbps). With no copper wire to slow the network down, the ultrafast connection will transform users’ online experience. At present, just three per cent of UK premises have access to these superior standard connections.

Cllr Douglas Lumsden, Co-Leader of Aberdeen City Council, said: “This announcement represents a significant step forward in delivering connectivity which will change the lives of residents and give businesses access to new ways of working. Aberdeen City Council is determined to lead from the front in digital transformation and enhance the city’s standing on the global stage. The collaboration with CityFibre and Vodafone is a wonderful example of our partnership approach in action – where the financial commitment we have made will leverage £40million of private investment in our city’s infrastructure.”

Vodafone UK Chief Executive Nick Jeffery said: “Our Gigabit broadband services, delivered over CityFibre’s new full fibre networks, will help Aberdeen build on its credentials in innovation and as one of the best places to start a business. It will also transform consumers’ daily lives through superior Internet access. We’re committed to helping businesses, entrepreneurs and residents embrace the new gigabit society in Aberdeen, the technological heart of Scotland.”

Greg Mesch, Chief Executive at CityFibre said: “Our commitment to Aberdeen is further evidence of the action CityFibre is taking to deliver Britain’s full fibre future. Our existing network in Aberdeen provides us with an eighteen-month head-start on a full fibre roll-out to nearly every home and business in the city. With similar FTTP backbone networks already built in over 40 UK towns and cities, our contribution to national full fibre coverage is well underway. We are getting on with the job of building Gigabit Britain – at full speed.”

Aberdeen is the second UK location to be announced as part of a strategic partnership between Vodafone and CityFibre, unveiled in November last year. The partnership focuses on extending CityFibre’s existing FTTP infrastructure to approximately 12 cities and reaching one million homes across the UK by 2021.

CityFibre will start construction of the new FTTP network in Aberdeen in July this year. It will use modern build techniques to deploy the network quickly, while minimising disruption. Once completed, nearly every business and home in Aberdeen will have FTTP access.

Aberdeen was chosen as the first FTTP city in Scotland because of the city’s emergent tech sector, the council’s forward-looking commitment to ‘smart city’ initiatives, and the strength of its support for the project. Customers in Aberdeen will be able to pre-register for the Vodafone full fibre service from today at www.vodafone.co.uk/broadband/ultrafast, with the first live services expected by early 2019.

Welcoming the announcement, Fergus Ewing MSP, Cabinet Secretary for Rural Economy and Connectivity, said: “This Government is committed to working with the private sector and local authorities to deliver the digital infrastructure needed all across Scotland to enable people and businesses to succeed. I therefore welcome this significant project from CityFibre and Vodafone. It will help transform Aberdeen into one of the UK’s best connected cities and contribute to our goal of an economically and digitally future-proofed Scotland. I am delighted that the Scottish Government’s recent £2m investment to increase broadband speeds for key public buildings across Aberdeen has helped pave the way for this deal.

“This announcement also reaffirms that our approach to Reaching 100% (R100) is working. We are focusing our £600m investment in Scotland’s rural areas, while also creating the right environment to encourage commercial providers like CityFibre and Vodafone to invest in our urban areas. Our approach will ensure we meet our commitment to deliver 100% superfast broadband access across Scotland by the end of 2021.”

To find out more about CityFibre and Fibre to the Home, visit: www.cityfibre.com/residential.