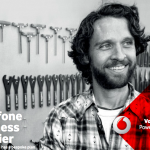 75 per cent of companies worldwide have now introduced flexible working policies to enable employees to vary their hours and use the latest technologies to work from home or on the move according to one of the largest global surveys of its kind conducted with 8,000 employers and employees across three continents. The survey – Flexible: friend or foe? – by Vodafone drew on responses from small and medium-sized businesses, public sector organisations and multinational corporations (MNCs) in 10 countries.

Respondents stated – to a striking extent – that they believed performance had been enhanced as a result of flexible working:
– 61 per cent of respondents said their company’s profits increased;
– 83 per cent reported an improvement in productivity; and
– 58 per cent believed that flexible working policies had a positive impact on their organisation’s reputation.

The rapid adoption of high-speed mobile data services, fixed-line broadband and cloud services is playing an integral role in this workplace revolution: 61 per cent of respondents now use their home broadband service to access work applications and 24 per cent use a mobile data connection via their smartphone, tablet or laptop with a broadband dongle.

Barriers to adoption
Vodafone’s survey also explored the reasons why 20 per cent of respondents said their organisation had not yet implemented a flexible working policy. Of those reporting that there was no such policy in place:
– 33 per cent said they believed it would not suit the culture of their organisation;
– 30 per cent were concerned about friction between employees working flexibly and those who did not do so;
– 25 per cent believed that work would be unfairly distributed between flexible and non-flexible groups of employees; and
– 22 per cent believed employees would not work as hard if allowed to adopt flexible working patterns and technologies.

While the minority of respondents without flexible working policies in place were clear on the reasons why their organisations had not yet pursued these, even within this group there was a clear sense that reversing their organisation’s position would deliver benefits:
– 55 per cent of employers without flexible working policies in place agreed that employee morale would improve if these were to be introduced;
– 44 per cent said they believed productivity would improve as a result; and
– 30 per cent believed profits would increase.

Vodafone’s Flexible: friend or foe? survey also found marked differences between age groups in the workplace. The new generation in the workplace is instinctively adopting technologies such as cloud services, advanced messaging and video conferencing that are central to flexible working. Researchers found that 72 per cent of 18-24 year olds believed that flexible working would improve the quality of their work. However, that proportion fell to 38 per cent among respondents over 55.

Vodafone Group Enterprise Chief Executive Nick Jeffery said: “Vodafone’s research reveals a profound and rapid shift in the modern workplace. Employers are telling us that flexible working boosts profits while their employees tell us they’re more productive. Central to all of this are the new technologies that are reshaping every sector, from high-speed mobile data networks and fixed-line broadband to the latest collaborative cloud services. We truly are in an era when work is what you do, not where you go.”

Notes to editors
The Flexible: friend or foe? survey was conducted by Morar (formerly Redshift Research) on behalf of Vodafone between September and October 2015. The countries surveyed were Germany, Hong Kong, India, Italy, Netherlands, Singapore, South Africa, Spain, the UK and the USA. A total of 8,000 employers and employees were interviewed online across 10 countries.
Download our flexible working guide at www.vodafone.com/WorkFlexi