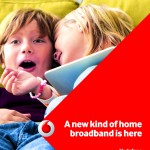 When it comes to staying connected, homes in Britain have a wide range of connected devices and digital products to keep the family online and in contact. But are we turning into a nation of digital dependants? And is there anything we can do to control our behaviour to make sure our work and family relationships don’t suffer?

When it comes to staying connected, homes in Britain have a wide range of connected devices and digital products to keep the family online and in contact. But are we turning into a nation of digital dependants? And is there anything we can do to control our behaviour to make sure our work and family relationships don’t suffer?

New statistics released today by Vodafone UK have found that more than 23 million Brits(1) don’t believe they could take on a digital switch-off challenge – going 24 hours without using any of their connected devices.

As part of a new Digital Behaviours study, Vodafone looked in-depth at the habits of 12 connected families from around the UK, and surveyed more than 2,100 other British residents on their own tech tendencies(2).

More than one in ten parents (15 per cent) admitted that they are worried others may judge them for allowing their kids so much screen time, however more than a third (34 per cent) admitted it is difficult to control the time their kids spend with screens, with 60 per cent even requiring digital products for their children to submit their school work.

British parents in 22m homes now have the chance to take control with Vodafone’s new broadband service. The service works seamlessly with a companion app, the first app of its kind for home broadband, that gives users the ability to schedule when Wi-Fi is available and when it’s not on certain devices. Users can even set timers for the service to switch itself off when it’s time for bed.

Vodafone has also published the latest edition of its Digital Parenting magazine – full of tips on how to help kids stay connected safely and manage their screen time constructively. The latest issue can be viewed here: http://vodafonedigitalparenting.co.uk/

“Internet enabled devices bring a range of great tools and services right to your fingertips, and it’s natural that people tend to use them more and more for work and play ,” said Cindy Rose, Consumer Director at Vodafone. “Despite this, it’s still important for families to be able to balance online and offline from time to time. Our aim is to provide our customers with the tools they need to easily manage that balance”

Those in our nation’s capital were least likely to take on the switch-off challenge – with little over half (52 per cent) of Londoners up to it, whilst those in the East of England were the most open to dropping their connected devices for a day, with 73 per cent open to other off line forms of entertainment.

The ten most common excuses for not switching-off are:

(1) Calculation is based on percentage of sample who do not believe they could go 24 hours without digital products (36 per cent), applied to the Office for National Statistics figure for the British population (64,600,000). Resulted in 23,256,000

(2) This study into digital behaviours was conducted by Vodafone and Bryter between 26 and 27 September 2015, comprising an in-depth study of 12 UK families and 2,103 UK respondents.