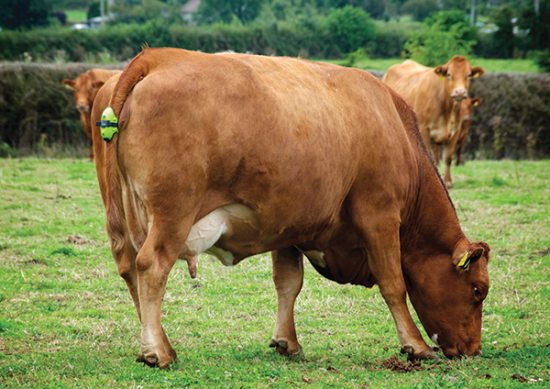 The UK mortality rate of calves and cows during birth could be reduced by as much as 80% predicts Moocall, the developer of a unique calving sensor linked to Vodafone’s Internet of Things network.

The UK mortality rate of calves and cows during birth could be reduced by as much as 80% predicts Moocall, the developer of a unique calving sensor linked to Vodafone’s Internet of Things (IoT) network. The predication comes at peak calving season, which started this month.

In the UK, more than 110,000 calves and around 50,000 cows die every year due to birth complications. The number of deaths and complications could be dramatically reduced by mobile technology which informs farmers how long a cow has been calving, so that they can intervene or call a vet if needed.

Around 150,000 calves in the UK and Ireland have been born safely using Moocall’s non-invasive, tail-mounted sensor to send vital alerts to farmers over Vodafone’s network, it was revealed  today.  The system also enables farmers to increase productivity of their herds and save money, with the average replacement value of a cow between £1,000 and £2,000 while pedigree breeds can command fees of up to £5,000 per cow.

The palm-sized sensor accurately predicts the onset of calving by measuring specific movements of a cow’s tail triggered by labour contractions. The device sends an audible alert, via Vodafone’s IoT network, directly to a farmer’s mobile phone when contractions reach a certain level of intensity, usually an hour before calving. An App also allows farmers to manage and monitor multiple sensors.

John Larkin, technology and marketing manager, Moocall, explained: “With help from Vodafone’s extensive network, Moocall is proven to help farmers ensure the safe delivery of a calf while maintaining the wellbeing of the cow. It also allows farmers to get some much needed rest, safe in the knowledge they will receive an alert at crucial calving moments rather than having to be on permanent watch.”

Vodafone Group Director Internet of Things Ivo Rook added: “Our global IoT platform allows Moocall to remotely manage and monitor every one of its sensors used by farmers, whether they are in the UK or in Australia. Together with Moocall, we are pleased to prove how the internet of things can help save the lives of calves”

About Moocall
Moocall, based in Ireland, launched the Moocall calving sensor commercially in January 2015 and since then it has sold more than 20,000 devices in 30 different countries worldwide.