From London Pride to the Epsom Derby, why Vodafone is the best network for special events

Vodafone UK’s network is the nation’s fastest at festivals, sporting tournaments and other huge massive-scale special events across the country, new research reveals.

In a testing and benchmarking exercise*, Vodafone found that its network was consistently faster than any of its rivals at the nation’s most high-profile and popular events throughout 2019.

From London Pride and the Wireless festival, to the Cricket World Cup and the London Marathon, Vodafone customers were able to call, message and connect with confidence.

To meet this surge in demand, Vodafone deploys extra resources to support around 50 special events across the UK every year. 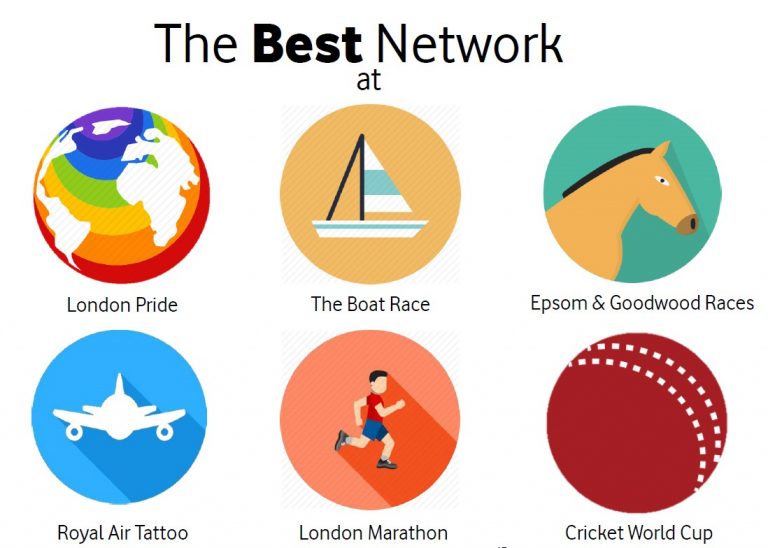 And as soon as an event has ended, Vodafone engineers take stock and plan ahead for the following year. The question is never “if” demand for mobile services will grow, but by how much. The engineers measure how heavily customers use the Vodafone network at special events and then use this data to forecast future demand. That in turn determines which technologies and techniques are needed to cope with that expected exponential growth.

From 2016 to 2019, demand for mobile data more than doubled year on year. In 2016, Vodafone used temporary mini masts to bolster the 3G network in the area and then upgraded it to 4G in 2017. In 2018, we used techniques such as spectrum re-farming to add even more 4G network capacity to meet ever-growing demand.

At this year’s tournament, we not only switched on 5G, but continued to make improvements to 4G, such as adding Massive MIMO [multiple input, multiple output] technology, which boosts both speed and capacity.

This pattern of meticulously managed measuring and monitoring leads to a carefully planned cycle of upgrades. And this methodology applies to everything we do, including our 5G roll-out.

In July, the Vodafone 5G network launched in seven towns and cities, with 23 more locations having since been added to the network. These 30 locations weren’t chosen at random – they’re all places that are seeing exceptionally high demand for mobile internet with no end in sight. Within those municipalities, 5G is deployed first to the busiest, most data-congested areas, such as business districts, shopping thoroughfares and major transport hubs.

As more customers take advantage of Vodafone’s Unlimited data plans on the 5G network, our engineers will be monitoring not only how much data is downloaded and uploaded but where and when these surges in demand occur – just as they would at a festival or stadium. This allows them to prioritise specific areas of a city or townfor further upgrades in both speed and capacity.

Cities are always tricky areas for mobile coverage, as the numerous buildings can deflect mobile signals.

This is where our investment in our 4G network pays off handsomely. As we were one of the first mobile network operators to use massive MIMO tech on our 4G antennae, we have a wealth of experience in how to configure and use this tech to give the best possible mobile coverage. That remains invaluable knowledge, as massive MIMO antennae tech is an essential part of 5G.

Our 4G network can have a more direct benefit for our 5G customers. When necessary, 5G phones on our network can use both 4G and 5G simultaneously to increase data speeds. Our 4G network uses a broad selection of spectrum across the 800, 2,100 and 2,600 megahertz (MHz) bands, giving it both speed and capacity. Combined with the 5G 3,400MHz spectrum, of which we have a huge block, this helps ensure a great experience for our 5G-using customers.

Whether it’s 4G or 5G, at special events or in our everyday lives, careful planning and relentless improvements using the latest technology are the hallmarks of the Vodafone network.

*Testing and benchmarking methodology footnote: Vodafone’s network engineers use nPerf Pro, an industry standard testing app, to benchmark network performance at special events. Engineers take test phones equipped with contract SIM cards for all four of the UK’s mobile networks to each event. They run nPerf’s suite of benchmarks which cover not only file download speeds, but also file uploads, latency, web browsing and video streaming. The tests are conducted for each network at multiple locations throughout the event, wherever there’s a heavy concentration of people, over a period of two to three hours.

If a phone fails any one of the tests, then the test is repeated unless there is no coverage at all. The best result from each test used as the final result.