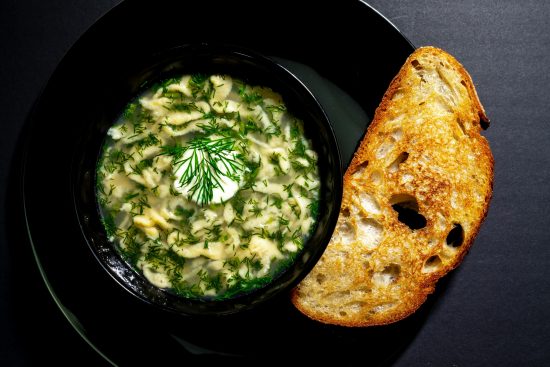 The recipes are based on findings from Imperial College’s DRUGS research project, which uses artificial intelligence (AI) and machine learning to identify disease-beating molecules in everyday foods.  These included those found in carrots, celery, oranges, grapes, coriander, cabbage, turmeric and dill.

The project was powered by DreamLab, an award-winning app developed by the Vodafone Foundation. The app uses the processing power of tens of thousands of smartphones being charged overnight to create a ‘virtual supercomputer’ to crunch data at lightning speed and hasten scientific research.

Dr Kirill Veselkov, lead computational scientist at Imperial College London, said: “We are seeing a continuous growth in chronic conditions, such as cancer, neurological diseases and heart disorders. A key contributing factor is poor diet; studies suggest that unhealthy diets are responsible for a fifth of deaths globally and it’s estimated that almost half of all cancers could be prevented by good dietary and lifestyle choices.

“The fact that our research was powered by the Vodafone Foundation’s DreamLab app enabled the public to get involved and help speed it up, which has been fantastic.”

“We are hugely proud that DreamLab has played such an important role in Imperial’s research project and in the development of this collection of recipes. And DreamLab continues to power research at Imperial College London – so please download the app and activate it whenever you charge your phone.”

Kitchen Theory chef Jozef Youssef said: “This seminal research – and subsequent recipes – are an important step in understanding how we can choose – and cook – food more intelligently to improve our health. The recipes in this book were created to show people how to use the disease-beating ingredients to create healthy and delicious dishes and drinks. I hope people will be inspired to create their own!”

Dr Michael Bronstein, Head of Graph Learning Research, Imperial College London, said: “HYPERFOODS is a UK first. By modelling interactions between food-based molecules and bio-molecules in our body, we can identify which ingredients might work in a similar way to medical drugs and therefore have the potential to prevent or beat diseases.

“Our ambition is to provide a quantum leap in how our food is ‘prescribed’, designed and prepared – and this is a great first step.”

As well as continuing to power cancer research, the DreamLab app is also supporting Imperial College London research into whether foods and pre-existing drug combinations can be used to treat Covid-19. The DreamLab app can be downloaded for free on the Apple Store or Google Play.  Please remember to activate it whenever you charge your phone!

The HYPERFOODS cookbook aims to raise awareness of the potential of food to optimise people’s diets, improve their wellbeing and reduce chronic diseases.

Dr Kirill Veselkov is an assistant professor in computational medicine at Imperial College London. Dr Veselkov has received a World Economic Forum (WEF) Young Scientist Award, and currently serves as an active member of the WEF Global Agenda Council on the Future of Computing.

Chef Jozef Youssef is the founder and creative director of Kitchen Theory, a London-based design studio with an award-winning Chef’s Table. Youssef works in collaboration with leading scientists and psychologists to research a broad range of food topics, from multisensory flavour perception to the role of food in healthcare.

Professor Michael Bronstein is a computer scientist, entrepreneur, and investor. He is a professor at Imperial College London and University of Lugano, as well as being the Head of Graph Learning Research at Twitter.

Others involved include academic collaborators from computer science, biophysics and analytical chemistry backgrounds, as well as experts from the fields of mass spectrometry, practical surgery, epidemiology and gastronomy.

The research paper ‘HyperFoods: Machine intelligent mapping of cancer-beating molecules in foods’ is available to view here. The paper was based on Imperial’s DRUGS project which, powered by the Vodafone Foundation’s DreamLab app, pairs bespoke artificial intelligence (AI) technologies, mobile supercomputing and big data to speed up scientific research and analyse billions of combinations of existing drugs and food-based molecules to identify previously unknown disease-beating properties.

The impact of AI and technology on food sciences

HYPERFOODS showcases the potential impact of AI and technology on food sciences. The relationship between food and disease is an emerging field of study and requires further clinical research. This has been recognised by the National Institute of Health (NIH) in the US, which recently announced it will invest $1.9bn (£1.4bn) a year for the next 10 years to accelerate research into nutrition.

The Covid-19 pandemic has highlighted the need for a renewed focus on nutrition in the UK, with Public Health England stating that obesity and poor metabolic health “puts people at greater risk of serious illness or death from COVID-19”. Obesity is one of the biggest health challenges the country faces, costing the NHS an estimated £6bn a year.

DreamLab is a specialist app, developed by Vodafone Foundation Australia as an easy way for anyone to support cancer research while their phone is on charge overnight. It is free to download and free to use for Vodafone customers, meaning it does not eat into monthly data allowances. The app can also be used across other networks, with users choosing how much data they wish to donate, or connecting via Wi-Fi. To download the app, search for DreamLab in the App Store for iOS or Play Store for Android.

DreamLab has been downloaded in the UK more than 171,000 times where it has processed over 70 million calculations for Project DRUGS.