Vodafone employee volunteers have gone to Romania and Hungary to help install free-to-use Instant WiFi and charging points for mobile phones, to help refugees stay in touch with family and friends and keep abreast of the latest news.

Given that many men have had to stay behind to fight while their wives and children have sought safety across the border, and many other family members are still in the country, keeping in touch is of paramount importance.

As well as connectivity, refugees also need the basics, such as food, drinks, and toiletries, which are being provided by charities such as the British Red Cross. While some of the stories the refugees have been sharing have been distressing, the volunteers say they have taken some comfort from the fact that their efforts are being appreciated.

Vodafone has used its global reach to instigate a number of measures aimed at helping the people of Ukraine.

In the UK, Vodafone has made all calls and texts to and from Ukraine free of charge for UK customers, and is match-funding donations made through the British Red Cross charity to the Disasters Emergency Committee (DEC) Ukraine Humanitarian Appeal.

You can donate any amount using this tracked link, or £10 by texting VODAFONE to 70141*. Every donation will be automatically match funded up to £250,000 and 100% of donations will go to the appeal.

Vodafone has redoubled its efforts to help those affected by the Ukraine crisis with a new package of measures.
Find out more

Vodafone is also offering free connectivity to 200,000 refugees arriving in the UK from Ukraine as part of the company’s everyone.connected campaign, and has launched Tech Appeal for refugees with a donation of 3,000 smartphones (connectivity included) and 1,000 portable power banks.

Meanwhile Vodafone’s operating companies in Europe, particularly those bordering Ukraine, such as Romania and Hungary, have been distributing thousands of SIMs loaded with free calls, texts and data to refugees at border crossings and in refugee camps, as well as installing emergency WiFi networks, with the support of the volunteers mentioned above.

You can read more about what each individual operating company is doing. 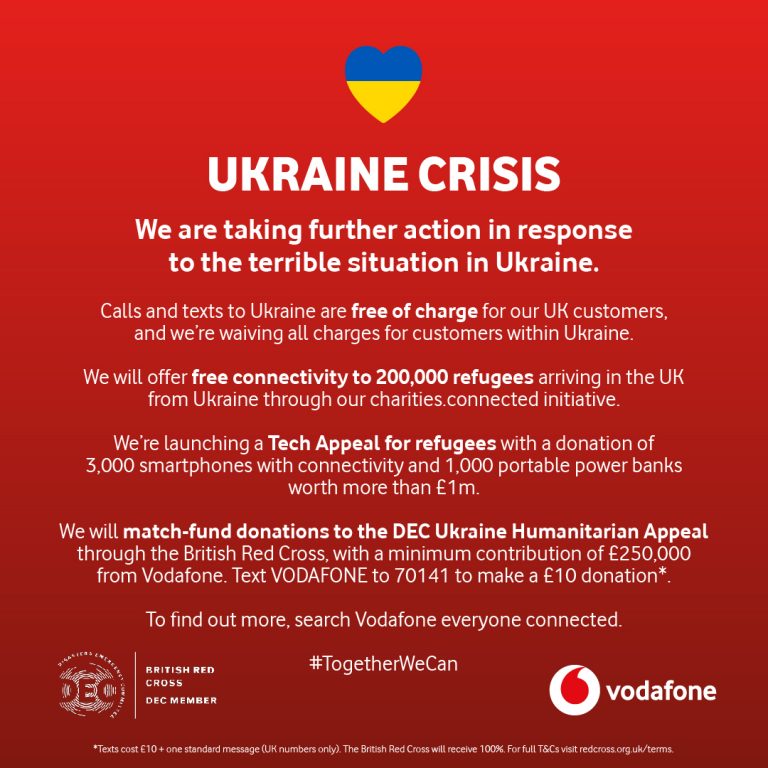 Vodafone Group Foundation has contributed €500,000 to UNHCR, the United Nations’ Refugee Agency (anyone can donate directly to the UNHCR fund).

And Vodafone is also offering fast-track employment opportunities to those displaced by the war. You can find out more on Vodafone’s Careers page.

* Texts cost £10 plus one standard message (UK numbers only). The British Red Cross will receive 100%. For full Ts&Cs visit redcross.org.uk/terms.