The cookalong livestream, sponsored by Vodafone, wasn’t just about beef, balls and beer – it also helped raise money for charity.

“Hinge is broken on me barbecue, so sometimes I hold it up like this with my head,” said rugby legend and pundit David Flatman as he used his forehead to prop up the lid of his outdoor grill. While David was hosting a livestreamed cookalong to support a serious cause, the Down’s Syndrome Association (DSA), he was also clearly intent on having a bit of fun along the way.

He was joined by three jersey-wearing rugby fans, all of whom had won the opportunity to take part – as well as steak meal kits matching David’s – through Vodafone’s VeryMe Rewards loyalty scheme. The livestream was hosted by Cookalong.TV and Vodafone. The meal kits were from Hawksmoor, a small group of steak restaurants that first started in London, while Sublime provided a selection of butters. Vodafone made a donation to the DSA.

David is a fan of cooking gadgets, even though he had to wrestle with an uncooperative Bluetooth meat temperature probe. It eventually started working part-way through his cook of the Hawksmoor-supplied porterhouse, rib-eye and fillet steaks. 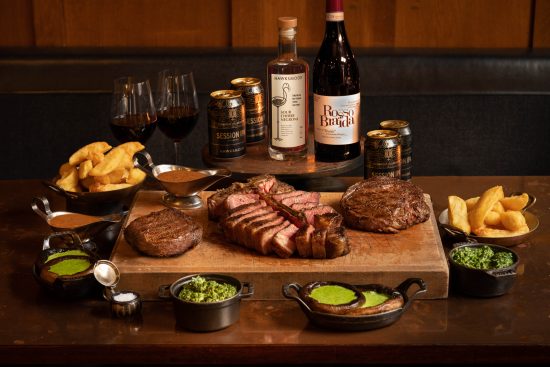 He had no trouble with his internet connection, though. David said: “Bath is a nice place, but you don’t get much [broadband] service down here. This little thing [gesturing towards a Vodafone Gigacube] gives you internet in your garden. I’m hoping they [Vodafone] leave that here!”

As well as trading steak cooking tips, David and the competition winners naturally talked about rugby. Topics included the line-up for the British & Irish Lions 2021 Tour of South Africa. As he spoke warmly about the skills of Elliot Daly and Courtney Lawes, he said: “We’ve got so many players to pick from that there’s always disagreement… there’s always going to be more conversation about selection.”

David also defended Alun Wyn Jones’ honour from the snarky nickname ‘Alun Whinge Jones’, noting that he didn’t complain about his injury which forced him out of the Tour. When asked if he too would’ve picked Connor Murray to replace Jones as Lions Captain, David said: “No, but only because I didn’t think of it… he’s back on mega form!”

When asked to name the toughest player he had ever faced off against, he reeled off a few names, including Darren Garforth.

“Lovely man, but a horrible geezer on the field… unbelievably hard guy – you’d have to kill him!”

David’s timing was impeccable as he wrapped up the cookalong in time to watch the 3 July British & Irish Lions match against the Sigma Lions – which our Lions won impressively 56-14 . “That butter is unbelievable… use your rib eye as toast!” David said as he daubed truffle, parmesan and black pepper butter onto Hawksmoor’s beef.

As he tucked into his steaks, his words to the cookalong audience were: “Allez les rouges!”