Finding suitable sites, securing planning permission, and building mobile phone masts is more of a tricky and time-consuming business than you may have realised. Our Q&A explains why.

Almost everyone wants fast and reliable mobile signal that reaches where they work and live. Masts and antennas are critical to providing that service. But they often arouse passionate opposition from residents objecting to their location, height and look.

So as mobile phone operators begin building the Shared Rural Network, we answer some of the most common questions we are asked.

What do all the bits of a mast actually do? 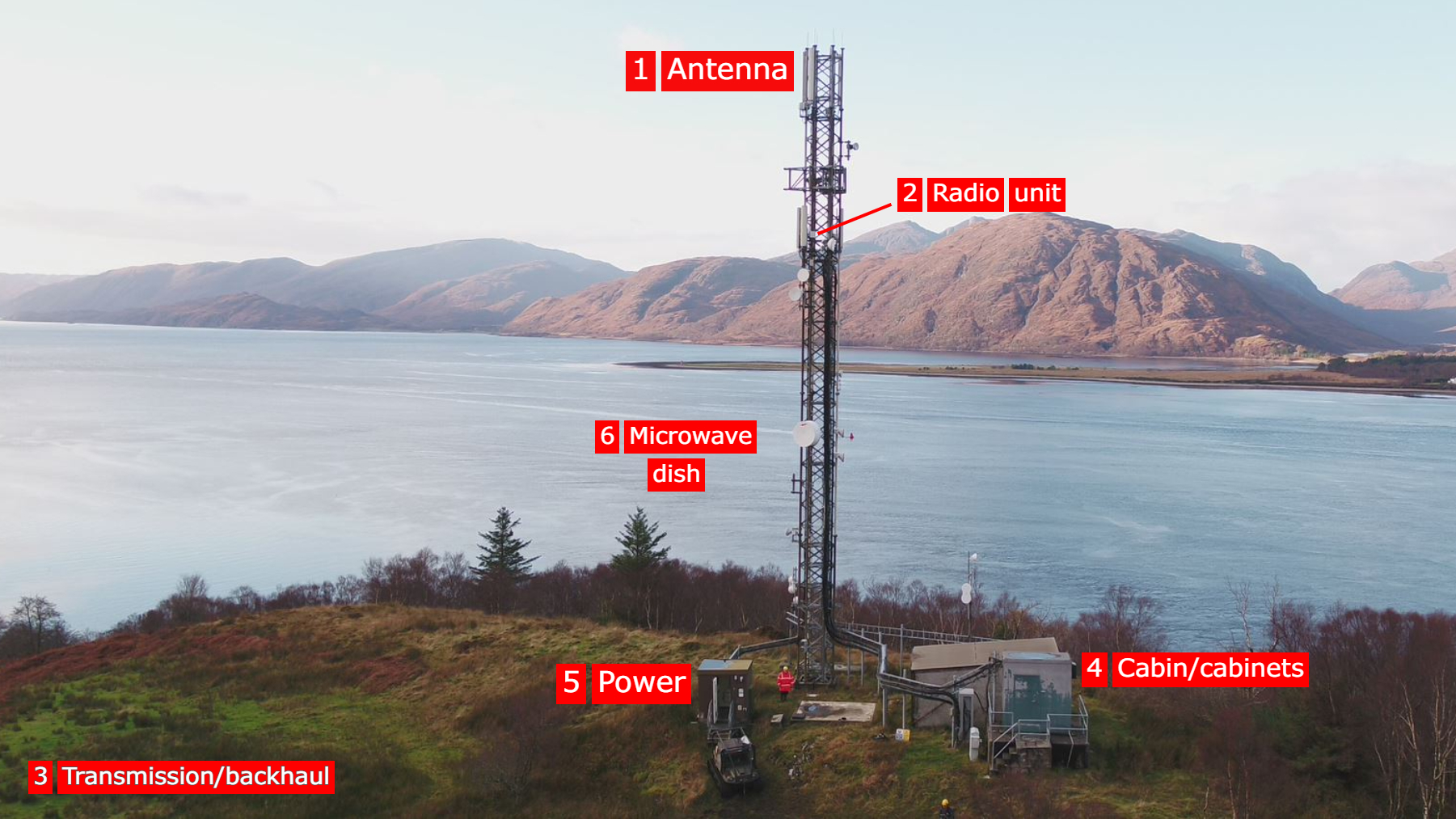 Antennas send calls, texts and internet data to your smartphone using radio waves and in turn receive radio waves from it. The higher up an antenna is, the more likely it is that you’ll get a strong and reliable mobile signal from it. Most masts will have at least three antennas to provide coverage in every direction. Masts that need to serve more people, because they’re located in more heavily populated areas, will have more antennas.

Cables, traditionally copper but now far more likely to be fibre optic, are used to connect the mast with other masts and the rest of the Vodafone network in the UK. These are usually buried in the ground. In a few cases, a microwave dish is used instead.

Located at ground level, these contain computers which communicate with other masts in the network. Additional equipment, such as a battery backup in case of power failure and connectors for the transmission/backhaul, are also stored here.

Most masts will draw their power from the National Grid; some will have their own renewable power source on-site. In a handful of cases, such as with temporary masts, power will instead be provided by a diesel generator.

In some locations, such as remote rural areas, a microwave satellite dish is used instead of fibre optic cables to act as transmission/backhaul, connecting the mast to the rest of Vodafone’s network. To do so, the dish must be within line of sight of a dish on another mast.

Why can’t you build it somewhere else?

Not all sites are suitable. To provide the strongest mobile signal to as wide an area as possible, there can’t be too many neighbouring buildings, trees or other geographical features in the way. These tend to block the mast’s signal.

Masts also need their own power and what’s known as “backhaul” – data connections to the rest of the network. To meet soaring demand for faster speeds, that backhaul often consists of fibre optic cables under the ground – it’s a common misconception that most of Vodafone UK’s masts communicate wirelessly with the rest of the network.

And to run these power and data lines to a mast, we have to negotiate with the owners of the land, and quite often, with the owners of land adjacent to it. Those negotiations aren’t just about how much rent we will pay, but how easily we can access those sites for construction, maintenance and repairs.

These so-called “wayleave” negotiations can take time – and sometimes break down completely – setting back mast construction by several months.

Why can’t you just build a shorter, less conspicuous mast?

The taller the mast, the wider the area it can cover and the more people it can provide with a fast and reliable mobile signal. Under current rules, most UK masts are around 25m (82ft) tall. But in fact 50m masts would provide a better, more far-reaching signal in many areas.

Update April 2021 – the UK Government has proposed rule changes that would allow new and existing masts to be up to five metres taller and two metres wider than they currently can be. This would not only help increase the range of their wireless signal, it would also make it easier for masts to be potentially shared with other mobile network operators, as more equipment can be fitted onto taller masts.

Who decides where masts are built?

Our engineers pick sites that best meet the technical, logistical and economic requirements for hosting a mast, but the local council has to grant planning permission for the building works to go ahead. So councils hold public consultations before making their decision and residents can have their say.

Why are they so ugly?!

Traditionally, masts are simply towers designed to raise the antennae up high enough to send and receive radio signals. They have to be sturdy and cheap to build, so form follows function. But telecoms companies have experimented with different designs and colours. Some lamp-post sized masts can be painted in different colours and disguised as flagpoles, lampposts and telegraph poles. “Mini masts” can even be disguised as bird nesting boxes and chimneys.

But there comes a point where aesthetics begin to hamper the job the mast is supposed to be doing. So it’s a trade-off.

What about these masts in phone boxes and under manhole covers?

Our engineers can install antennae into phone boxes, store fronts, manhole covers and other street furniture, but these antennae have shorter range than their taller cousins, so you need more of them.

This makes them best suited to specific areas, such as beaches or especially busy thoroughfares where mobile reception is poor or non-existent. In other words, “mini masts” are a complement to tall masts, not replacements for them.

Does mast construction have to lead to road closures?

Not necessarily, but if the only way our cranes and other heavy vehicles can deliver and install bulky equipment is by public road we may have to close it temporarily. Once a local authority grants planning permission for construction, we provide residents details of any planned road closures, which we always try to keep to a minimum.

How long does it take to build a mast?

It usually takes around 12-18 months, from our engineers first identifying a potential site to the erected mast going live after extensive testing.

Why does it take so long?

Any problems negotiating with land owners or planners, or delays with equipment delivery, can lead to lengthy delays.

Thieves sometimes target our building sites, looking to steal and re-sell pieces of copper or the high-capacity batteries we used as power back-ups in the event of a blackout. We’ve even stopped construction to allow nesting birds to lay their eggs and bring up their families. 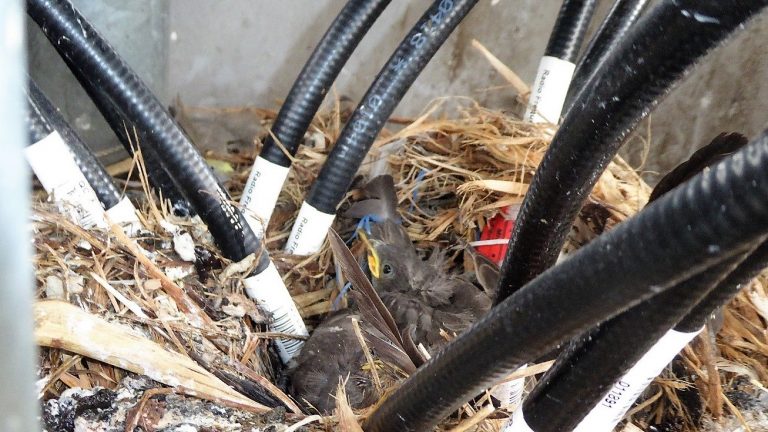 Residents opposed to masts have sometimes blockaded mast sites and prevented our engineering crews from entering, or have even resorted to vandalising equipment.

Even an application for a road closure can take 12 weeks to process and then be denied at the very last minute. And, of course, severe weather can make it unsafe for construction crews to work.

What about the health effects of mobile phone masts?

Mobile masts – whether 2G, 3G, 4G or 5G – do not cause any adverse health effects. That’s the consensus of international scientific bodies, such as the World Health Organization, the International Commission for Non-Ionizing Radiation Protection (ICNIRP), and Public Health England.

And media regulator Ofcom recently carried out tests of electromagnetic field (EMF) emissions from 5G mobile base stations and found the levels to be “at small fractions” of recommended safety levels.

The radio signals we use are simply too weak to cause any damage to living cells or human DNA.

3G switch-off: Do you know if you’ll be affected?