Get Started With… Digital Art: Expert advice from Draw With Jazza

In the first in our new 'Get Started With...' series we're looking at how you can crack into the world of digital art. Styluses at the ready! 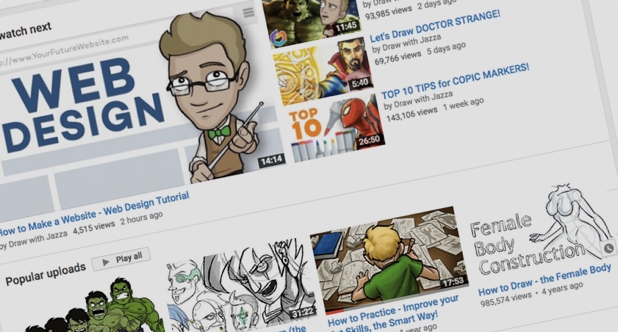 If you want to learn something, learn from the best. That’s the thinking behind our brand new ‘Get Started With…’ series, which aims to shine a light on a tech hobby through the lens of an established expert in the field.

In this first edition we’re looking at digital art, and to do that we’ve caught up with Josiah Brooks, the man behind the wildly successful YouTube channel ‘Draw With Jazza‘. How can you get started scribbling in the digital arena, and could it end up paying the bills? Here’s how Jazza made that dream a reality…

From paper, to tablets, to VR…

“I’ve always been into drawing,” Jazza says. “Art has been my escape, my way to tell stories and create characters, ever since I was a child. I was sometimes quite lonely at school and I was bullied a bit when I started high school, so at lunchtimes I would often sit by myself and draw.”

And, as the requisite tech evolved, it was around that age that Jazza first took his drawings from the page to computer screen.

“I was about 12 years old when I started playing around with early versions of Photoshop and Flash, and I got my first drawing tablet at 13.”

Ask any digital artist worth their salt and they’ll all tell you that they use a tablet. But we don’t mean an iPad, here – the professional space is dominated by tablets with stylus’ either running a desktop OS or connected to it, made by the likes of Wacom. But, as Jazza reveals, you haven’t missed the boat if you’re looking to get involved; the whole industry is about to enter a brand new frontier:

“When digital art emerged as an option I knew I wanted to jump on board, but obviously since then software and tools have come a long way,” he says. “Right now things are moving on again, and I am so excited because on my channel I’ve just begun to create 3D art in virtual reality. It’s an exciting time.

“There’ll be more development in the software and tools for VR art in the same way as there was with regular digital art, so no doubt this is just the beginning.”

Painting in Virtual Reality is an exciting prospect, but however you’re thinking of putting pen to digital paper, let’s get straight on to the nitty-gritty: how did Jazza turn his love of art into a successful career?

“I had dreamed of writing a ‘How To Draw’ book since the age of 12, but it’s not until recently that I’ve been able to make a stable living in the art world. I began to feel confident about making an OK wage with it about three years ago when I began to get some reasonable freelance jobs – mainly as an animator rather than solely an artist. It wasn’t stable, but it was suddenly paying the bills.

“The problem was animation is very slow work,” he explains, “and there was only one of me, so it was always going to be limiting in terms of making a stable income.” Luckily, YouTube was there to pick up the slack:

“I’d already started doing little art tutorials on YouTube – at first on a channel that contained a mixture of other stuff like music – but I noticed the art tutorials were quite popular. That’s when I decided to start Draw With Jazza and see if it would grow into anything.”

“I had to convince my wife that it was worth turning down freelance on occasion to keep focusing on my YouTube channel,” Jazza continues, “where I could see building a reputation and better potential for growth than with one-person animation.”

Doing so proved to be a wise move; Jazza’s YouTube channel has grown from small beginnings to a point where it now boasts well over 900,000 subscribers, all coming back for Jazza’s unique mix of professional tutorials and irreverent art challenges.

“The YouTube channel eventually brought the offer of my first published book – ‘Draw With Jazza: Creating Characters’ – and even a children’s television art show,” he says.

It’s an amazing success story, but it didn’t happen overnight…

“I think a lot of people who start a YouTube channel want to see automatic viral videos, but the reality is it takes a lot of channels years to build an audience and the ones with the initial viral hits often don’t go on to be long term successes. My channel definitely wasn’t viral; it took a few years to get momentum. In total I’ve been on YouTube for about four years, but after year one I only had about 5,000 subscribers. It took three years to reach 100,000, now at the beginning of my fifth year I will probably hit the one million mark – I’m so excited about that.”

Creating regular and interesting videos for five years is no mean feat. So how does Jazza keep things fresh?

“I love art and I make content that I would be interested in watching,” he says. “Although I pay a bit of attention to what’s popular, that’s not the main driver for my content choices as I feel when you do that the content becomes ‘fake’ and lacks quality. I really believe in making videos that I enjoy making. It’s not just about art, but also about showing your personality and letting people in.”

The right tools for the trade

Still keen to crack into digital art? Here’s Jazza’s top tips on how, and how not, to get started. Unsurprisingly, the first tip he has to offer is: practice.

“I think most people expect to get good quickly, or maybe when you look at developed artists they make it look easy, and you compare yourself unfavourably to that. But it takes good artists years and years of practice to get that way, so you need perseverance and patience with yourself.”

And if you’re going to get serious, you’ll need the right tools.

“You need a decent tablet of some sort,” Jazza says. “It doesn’t need to be expensive, but get one made especially for art. You can get started with a basic Huion or Wacom tablet from ebay if necessary. That tablet will need to be connected to a PC or Laptop with Photoshop or similar software on it.”

But the hardware and software don’t have to stay on the Desktop. Apps made for tablets like Apple’s iPad Pro and Apple Pencil are coming to the fore, allowing artists like Jazza to take their work on the move. “Adobe’s Photoshop Sketch and Illustrator Draw for iPad are good apps,” he says, “and a lot of people like using Autodesk’s Sketchbook app.”

At the end of the day, however you get setup, Jazza’s got one word of advice: “It’s the same as my advice for any kind of beginner: practice, work hard and don’t be too tough on yourself.”

You can find oodles more content and tutorials at Draw With Jazza on YouTube, or at JazzaStudios.com.