Helen Lamprell, Corporate & External Affairs Director, Vodafone UK, talks about fundraising for Manchester and how to support those affected by the fire at Grenfell Tower and the terror attacks in London. 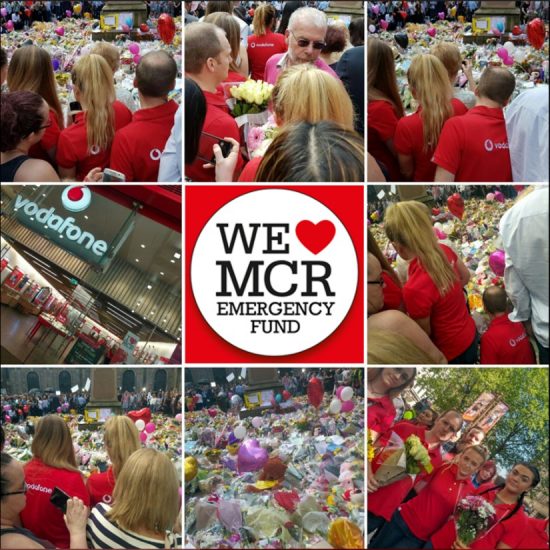 The We Love Manchester Emergency Fund

Thank you to everyone who contributed to the We Love Manchester Emergency Fund, managed by The British Red Cross Society.

The Vodafone Foundation committed to match fund all text donations raised up to 13 June. Thanks to the generosity of the public and the fundraising efforts of supporters like artist Scarlet Tentacles – who organised a charity art auction in conjunction with Art Battle Manchester – and Vodafone colleagues from the Manchester area, who participated in a charity walk, over £43,000 was raised and will now be doubled.

In the aftermath of the terror attacks at Borough Market and at Finsbury Park in London, the Vodafone Foundation is committed to match funding text donations made to the Red Cross’s UK Solidarity Fund.

Between now and 9 August 2017, The Vodafone Foundation will match donations of up to £100,000, with donations channelled towards supporting people who have been injured, bereaved or traumatised as a result of acts of terrorism anywhere in the UK.

To donate on your phone, text:

The Vodafone Foundation is also match funding up to £100,000 of text donations made to the Evening Standard Dispossessed Fund, which has already seen over £80,000 donated via text by the public. To contribute to the fund, text:

The Vodafone retail teams have also been working tirelessly to support those affected by the Grenfell Tower fire.

Through our local stores and the eight official support centres, our teams have been providing access to the internet, phones, chargers, battery packs and Pay as you go credit.

Our teams will continue to offer this support to the community over the coming weeks.