Apple may be best known for its iconic iPhone, but the Californian tech giant unveiled a number of other new products at its recent 'Spring Loaded' launch event. We give you the lowdown.

When Apple comprehensively revamped the iPad Air in the autumn of 2020, the gap between that mid-range tablet and the iPad Pro narrowed considerably with the two sharing many of the same features. Now the iPad Pro has had a refresh of its own that definitively sets it apart once again from the iPad Air.

Alongside several technologies making their way over from Apple’s MacBook Pro laptops, there’s also a brand new screen technology to rival many other screens you may have used to date.

The 2021 iPad Pros are the first to come with a 5G option, so they can connect to Vodafone UK’s ultra-fast, low latency 5G network. Vodafone’s 5G network is now available in more than 100 locations across the UK.

The iPad Pros also have more flexibility than ever when it comes to wired connections. The USB-C port doubles as a Thunderbolt port for connecting specialised devices such as multi-disk storage arrays and 6K monitors. Until now, such devices had largely been the preserve of desktop and laptop computers.

Impressively, the iPad Pros also boast the same M1 processor as the latest Mac desktop and laptop computers. MacBooks equipped with the M1 have been lauded for being as fast or faster than comparable models equipped with Intel processors, while lasting longer on battery power, running far more quietly, and emitting considerably less heat.

The power of the M1 should open up a whole new world of apps on the iPad Pro. Apple has already teased an iPad version of the game Divinity: Original Sin II – a title which originally debuted on far bulkier devices such as the PlayStation 4, Xbox One and Windows gaming PCs.

While the 11in iPad Pro retains the same display as its immediate predecessor, the 12.9in variant is an entirely different beast. It’s one of the first screens anywhere to use mini LED (light-emitting diode) technology, so the light-emitting parts of the display are now much smaller and can be controlled in a far more fine-grained manner than before.

This not only ensures power-efficiency, but enables the display to have exceedingly high brightness and contrast levels. The 12.9in screen also has a very high dynamic range. So, for example, images that have details in both very dark and very bright areas will still appear onscreen accurately. 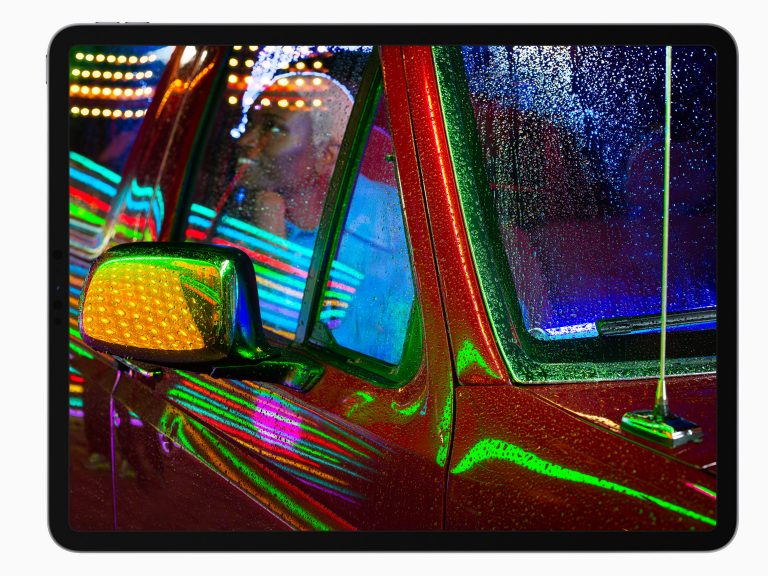 While Apple could’ve used OLED (organic light-emitting diode) technology to achieve the same benefits, as it has on recent iPhones, large OLED screens tend to be very expensive to produce. That’s why OLED TVs tend to be much more costly than similarly sized non-OLED models.

It’ll be interesting to see if other makers of computing devices follow Apple’s lead in adopting mini LED displays.

For video chats and meetings, the front-facing camera has some clever tricks up its sleeve. In supported apps such as FaceTime, the ultra-wide angle lens work with artificial intelligence to ensure that you’re always in view even if you’re moving around the room. This ‘Center Stage’ feature works by intelligently deciding when to crop in on your face and when to display the full view, such as when you’re giving a demonstration or when another person on your end pops into view.

With this latest update, there are now clear differences between the iPad Pro and iPad Air, with the Pro models clearly aimed at highly demanding users who want to create and edit content while on the move, whether photos, illustrations, or video.

Apple has dived into the Internet of Things with AirTags. You attach these compact circular connected trackers to objects, such as your keys or bag, which you can then track if they’re ever stolen or lost.

Unusually, AirTags don’t rely on a mobile network connection once they’re out of Bluetooth range. They can instead relay their location to you via any other internet-connected Apple devices that happen to be nearby, using end-to-end encryption to ensure that the location data is shared only with you.

AirTags also use ultra wideband (UWB) technology, a short-range wireless technology that also includes accurate directional data in its signals. Using it, AirTags can communicate their precise location to iPhones that also have UWB (namely the iPhone 11 and 12 ranges). So if you lose your AirTagged keys in your living room, the Find My app on your iPhone 12 can direct you to their exact location behind or underneath furniture.

AirTags are otherwise similar to other connected trackers, such as Vodafone’s own cellular-connected Curve which was recently updated with new features of its own.

Apple has updated its Apple TV 4K streaming box with a faster processor and a redesigned remote. The former ensures that the Apple TV 4K is powerful enough to play shows and movies that have both high frame rates and high dynamic range, including those that meet the Dolby Vision standard. The latter quietly address complaints that the previous remote was too fiddly to use comfortably.

The most intriguing new feature is one that most people will probably only ever use once.

The new Apple TV 4K can use the sensors in a Face ID-equipped iPhone to calibrate its image quality settings. It guides you through the process step-by-step, giving you the best possible picture quality – no matter which TV you own and whether or not you’ve ever adjusted its own picture settings. It’s a unique feature for a streaming box, similar to the colour-calibration colorimeters used by professional graphic designers and photographers to ensure their monitors have accurate picture quality.

Desktop computers might seem quaint these days, but they’ve seen a resurgence in popularity as many of us have taken to working from home. Apple’s latest iMac all-in-one desktop computer, where the computer is built into the monitor rather than sitting separately, is radically different from its predecessors, both inside and out. 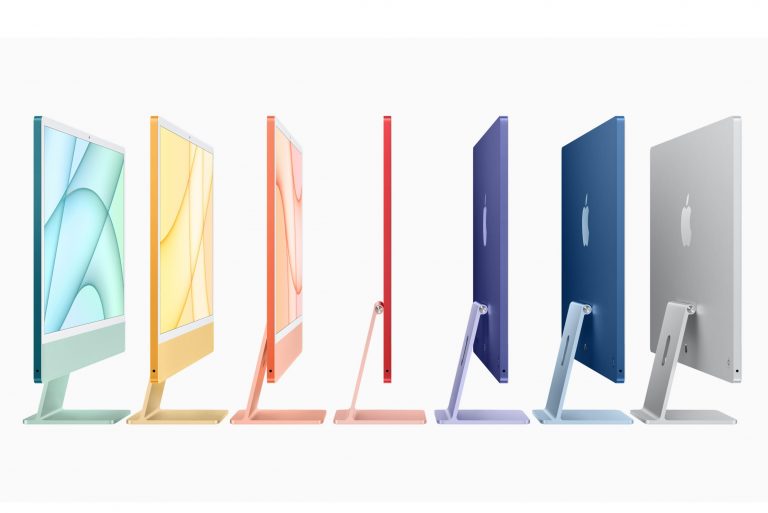 Its wafer-thin metal-and-glass casing comes in a variety of colours – tastefully muted on the front so as not to distract you, while vibrantly snazzy on the rear. It’s a return to the technicolour hues of iMacs from two decades ago, before they took on the more metallic tones that Apple’s devices are now known for.

Inside, the iMacs are the latest Macs to make the switch from Intel’s processors to Apple’s own – the M1. This processor has been lauded for its performance, which it manages without intrusively noisy cooling fans or by belching out excessive gusts of hot air – irritants many desktop and laptop users will be familiar with. These qualities not only give the iMac its speed, but also its unobtrusive presence.

All this, along with its colour-accurate 24in display with a resolution exceeding 4K, could make the new iMac your next computer if you don’t need the portability of a laptop or tablet.

Look out for pre-order information over the coming weeks – and details of alternative iPads and tablets – on Vodafone.co.uk.