Manchester, home to Vodafone’s Northern Hub, celebrated a major milestone in UK telecommunications back in April 2018, when we completed the first test of new 5G spectrum across an existing live network. This test, marking the first time that the 3.4 Gigahertz (GHz) radio frequency allocated for 5G had been used in the UK, connected Atlas House and our headquarters in Newbury, Berkshire. Vodafone carried out the test just a week after securing the largest slice of 5G spectrum in Ofcom’s auction.

This week we’re taking another big step forward on our 5G journey with the news that Manchester will be a key testing area for 5G, alongside six other UK cities – Birmingham, Bristol, Cardiff, Glasgow, Liverpool and London. Roll-outs are expected to start between October and December.

Our announcement that Manchester will be a 5G test city highlights our commitment to investing in the Greater Manchester area and promoting regional development in the North West. We’re investing in a number of ways, from customer care jobs and digital skills to connectivity. Here are some examples of the work we’re doing across Greater Manchester.

We’re making solid progress recruiting an additional 800 people in Manchester, our customer care hub, which is home to 20% of our UK operations. Already we’re ahead of schedule: one year into a planned three-year expansion programme, we’ve filled half the roles, with another 400 people due to be hired this year.

To accommodate the more than 1,000 employees who now work at Atlas House, our customer contact centre in Wythenshawe, we carried out a major refurbishment. And to ensure we provide our customers with excellent service, we increased our investment in staff training and development.

We haven’t stopped there. To help people on a career break return to work on a full-time or flexible basis, we recently launched our ReConnect programme, which is open to men as well as women. We also want to help young people improve their digital skills, which is why this summer we’re offering a free, 4-day coding workshop to girls aged 14-18 through our #CodeLikeAGirl programme.

Expanding the pool of digital talent in Greater Manchester 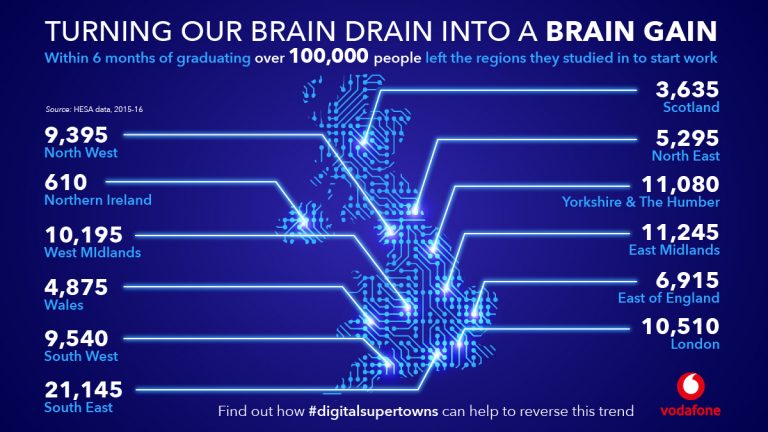 As a regionally-organised business and a Northern Powerhouse partner, Vodafone is committed to helping the North reach its full potential. Recently, we commissioned a report titled ‘Brain Gain’, on how towns and cities in the North West and across the country can build a steady pipeline of digital talent so that the UK can take full advantage of the benefits of technology.

Manchester is the UK’s single biggest tech centre outside London, supporting 62,653 digital tech jobs and generating £2.9 billion in turnover, according to Tech Nation. Initiatives like #RelocateMCR are a great way to draw attention to all that Manchester has to offer. There are all kinds of resources available to aspiring entrepreneurs, such as Manchester Metropolitan University’s business incubator for new start-ups, Innospace, offering advice, mentoring and work space, and Marketplace Studios in Stockport’s Market Square, which provides incubation studio space tailored towards creative industries.

With a thriving digital economy, there will be more well-paying jobs available to support a growing base of digital talent.

As our ‘Brain Gain’ report noted, good transport infrastructure is essential if we are to encourage more people to move into the region and stay. Providing connectivity on board is also key. Over the past year, passengers travelling on Greater Manchester’s 120 Metrolink trams have enjoyed free public Wi-Fi access with Vodafone. We’re delighted to have connected a record number of people using Metrolink – passenger journeys rose by over 11% to 40 million in the year to September 2017, driven by the opening of a second route through the heart of Manchester city centre. Now, as part of our commitment to the North West, we’re proud to extend our partnership with Transport for Greater Manchester (TfGM) and become the first sponsor of free public Wi-Fi on Metrolink.

We are also supplying free Wi-Fi connectivity across 20 Metroshuttles, free buses linking the main rail stations, car parks, shopping areas and businesses in Manchester city centre. Our investment in TfGM will be ploughed straight back into the transport network, which means an even better travelling experience for passengers.

Investing in 4G connectivity across Manchester

As the official Wi-Fi provider to Metrolink, we’ll ensure that passengers can continue to rely on Vodafone to stay connected to the Internet while on board. As a result of our network upgrades, passengers on a typical journey will be on 4G more than 99.8% of the time, all on our most reliable network ever. That’s great news for passengers wanting to stream music or video while on the move. Already, Mancunians using the Vodafone network download the equivalent of 37.5 million music tracks[i] every day, our figures show.

So far, we’ve expanded our ultra-fast and reliable 4G service to cover around 96% of the city. Our enhanced 4G+ service offers faster speeds than standard 4G, and is already available in most of the city’s sites. With Greater Manchester expected to record the biggest population increase in the north at just over 10% to 3.1 million by 2036, we want our network to be ready.

Metrolink’s transport network is vital to Greater Manchester’s fast-growing digital economy, which boasts about 7,500 digital and creative businesses employing around 54,000 people. In fact, Metrolink connects six of the 57 places across the UK identified as future “Digital Super Towns”, or leading centres for technological innovation. These are Altrincham, Ashton-under-Lyne, Bury, Oldham, Salford and Manchester. By providing Metrolink commuters criss-crossing these places and more with reliable 4G connectivity, we aim to play our part in helping Greater Manchester attract and retain even more digital talent.

Investing in a 5G future in Manchester & the North West

5G is a vital part of building Gigabit UK, a nation where people enjoy ultra-fast connection speeds of 1 gigabit per second, low latency and more reliable network performance than ever. As we prepare our network for 5G, we’re also working to prepare the North West for a fourth industrial revolution that will transform how we live and work. Vodafone’s investment in the North West is a key part of these preparations, and will help to ensure that our digital economy continues to flourish long into the future.

[i] Based on usage data collated by http://www.broadbandchoices.co.uk/guides/broadband/guide-to-internet-data-usage