Vodafone went to the Isles of Scilly to test Fan-Assistant Refereeing (FAR) – a system that enables supporters to help the referee make tricky decisions via their 5G-enabled devices. Here’s what you need to know about this world first…

It’s fair to say that Video-Assistant Refereeing (VAR) has received a mixed reception from football fans since its recent introduction to the game. Nabbing as many headlines as Kevin De Bruyne registers assists, noise from the terraces is split between hopeful chants of “V-A-R!” when a team concedes, to an almighty chorus of boos when the tech – and army of assistant refs – find fault in a favourable decision.

So we asked ourselves: can supporters provide a less controversial alternative? And took to the Isles of Scilly to find out.

Home of the smallest football league in the world, and containing only two teams, the Woolpack Wanderers and Garrison Gunners, the Isles of Scilly agreed to test the world’s first Fan-Assistant Referee (FAR) system. It works by crowd-sourcing decisions from fans to support the referee with on-the-spot decision making – putting them at the heart of the game.

How did it all work out, and will we be seeing FAR grace the Champions League any time soon? We’ve got the highlights here…

First, the match: a scintillating tie between the league’s top (and only) teams, the Wanderers and the Gunners. During the game, referee Paul Charnock was armed with a 5G phone and, when contentious issues arose, he enlisted the support of fans at different locations around the island who were watching the game on their phones . They were able to see replays of any dispute in slow-motion and from different angles. Then a poll was conducted to see what action the ref should take, with the results displayed on Mr Charnock’s phone. 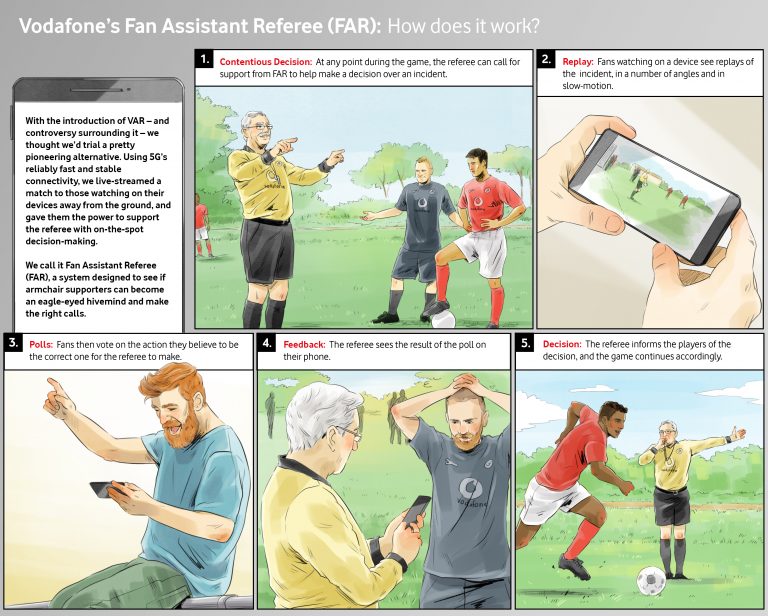 The fans voted on handballs, penalties, fouls, and goals over Vodafone’s lightning-fast 5G network. Then it was up to the official to inform the players of the decision.

And it’s fair to say that some of the calls from armchair supporters were less than popular: “The idea behind it is class, but the public who were streaming it made some absolutely shocking decisions,” Chairman of the league, Anthony ‘Gibbo’ Gibbons, said: “I produced one of the best tackles of my entire career, and people watching informed the ref it was a foul. Even now watching it back I am baffled. Scandalous.”

FAR led to a thrilling match, with the Woolpack Wanderers coming out on top as 4 – 3 winners, with only a few minutes to spare, after fans awarded a goal which was originally called offside. It seems that even in the hands of supporters, controversy in football is never far away.

Referee Charnock was a little more welcoming of the approach: “It’s a novel idea. If FAR gets more people involved in the game – particularly at this level – then it can only be a good thing. Let’s see how things develop…”

And while FAR may not be quite ready for the world’s biggest stages, the football league on the Isles of Scilly provided a perfect testing ground for 5G, with the test placing it under real-time scrutiny. It’s fair to say, it passed with flying colours.

5G on the Isles of Scilly

The speed and reliability of 5G makes this kind of experiment possible. Scott Petty, Vodafone’s chief technology officer, said: “I think the trial was a huge success, and hopefully only the first tech experiment in Vodafone’s two-year partnership with The Isles of Scilly Football League.

“The fast speeds and reaction times of 5G lend themselves to situations where time is of the essence. It allows fans to experience a little of the pressure facing match officials, and helps local communities feel closer to Sunday league action.

“5G can also offer many benefits to large but remote communities like the one on the Isles of Scilly: access to vital financial, educational, and healthcare-related digital services enjoyed by people in towns and cities would be just the start. Vodafone is closing the divide between rural and urban communities because all people have the right to be connected.”

While you may not hear chants of “F-A-R” in the Premier League any time soon, 5G certainly has the potential to get the crowd off its feet.

How 5G will help businesses rule the waves in Plymouth