News Centre Home Smart Living Everything you need to know

Smart Living | Everything you need to know

Everything you need to know |

5G and health: Everything you need to know

There has been a lot of misinformation posted on social media about 5G in relation to human health. Watch the video above and read our Q&A guide to find out the facts.

A. It’s the next generation of wireless mobile technology promising download speeds 10 times faster than 4G, much lower latency or time lag, and greater capacity, meaning more people can use it at the same time without any connectivity issues. It could underpin the smart cities of the future, enabling driverless cars, drones, traffic lights, pollution sensors, even street lamps, to communicate with each other, collect and share data.

Read our in-depth guide: 5G: Everything you need to know.

Q. Can 5G cause coronavirus?

A. No way. 5G is made up of radio waves – particles of light – while coronavirus is a parasitical biological organism that needs to hijack the cells of living creatures to survive for longer than a few hours or days. The two are completely separate things. Online conspiracy theories linking 5G and coronavirus are “complete rubbish” and “non-science”, say scientists quoted by the Science Media Centre.

A. Yes. 5G may be a new mobile standard, but the radio waves it uses have been around for decades and thousands of scientific studies have shown them to be safe for humans. It’s important to understand where they sit in the electromagnetic spectrum and the energy levels at which we use them.

A. Glad you asked. Have a look at the diagram below. 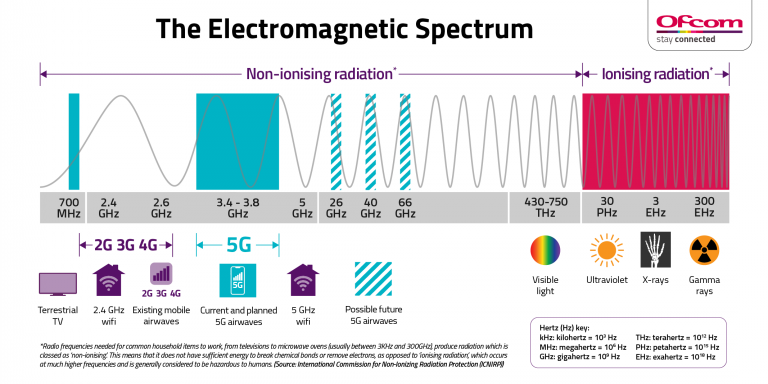 5G sits in the portion of the spectrum that includes the radio waves we use for mobile phones, your home Wi-Fi and baby monitors. These waves have much less energy even than visible light.

A. Ah, you’re probably thinking of nuclear radiation, which is dangerous. The radiation we’re talking about – radiofrequency electromagnetic field (RF EMF) radiation to be precise – isn’t dangerous at all at the very low energy levels used for mobile communications.

A. 5G radio waves don’t have enough energy to harm living cells, break chemical bonds or damage DNA. They call this low-energy kind of EMF radiation non-ionising. It’s the extremely high frequency ionising radiation at the other end of the spectrum – X-rays, Gamma rays – that are potentially harmful.

Effectively, all non-ionising radiation can do is warm up living cells. This is why there are strict international quidelines setting maximum levels of EMF radiation that we should be exposed to from phones, masts, antennas, and base stations.

Q. Who sets these guidelines?

A. An independent body of scientists, called the International Commission on Non-Ionising Radiation Protection (ICNIRP), looks at all the available scientific evidence and sets guidelines for maximum safe exposure levels to EMF radiation. It recently updated these guidelines in March 2020 and concluded that 5G was completely safe if these guidelines were followed.

Q. Who checks that these guidelines are being followed?

A. In the UK, the Health and Safety Executive (HSE), a government agency, enforces the limits on masts’ non-ionising radiation levels. HSE, along with Public Health England, part of the Department of Health, has adopted ICNIRP’s guidelines, as have the World Health Organisation and the European Commission.

And UK media and telecoms regulator Ofcom tests EMF emissions at masts and base stations – including those from 5G – to check that they comply with ICNIRP’s guidelines. Ofcom’s most recent tests (April 2020) found that 5G emissions were just 0.039% of ICNIRP guidelines. Even including emissions from other mobile technologies, such as 3G and 4G, the maximum level measured was just 1.5%.

5G electromagnetic field emissions from masts and base stations in the UK were a tiny percentage of international safety guidelines in recent Ofcom tests (April 2020).
0.039%

Q. So why do some scientists say 5G could be harmful?

A. Some scientists will always disagree with each other, but what really matters is evidence – facts that can be replicated in controlled experiments and presented in scientific papers that are then “peer reviewed” by other experts.

The global scientific consensus based on all the available evidence is that 5G isn’t harmful to human health. Scientists who disagree are very much in the minority.

Q. What about this high-frequency “millimetre wave” 5G I’ve read about?

A. So-called millimetre wave (mmWave) 5G uses higher frequencies (24Ghz–100GHz), but as you can see from the electromagnetic spectrum infographic above, these frequencies are still way below the frequencies of visible light, which is harmless.

And it’s important to note that we don’t even use mmWave in the UK; it’s used in the US. If we ever were to use it in the UK, it would still have to comply with ICNIRP safety guidelines.

Q. Where can I find out more?

A. Have a look at the 5G-related information on the following pages: